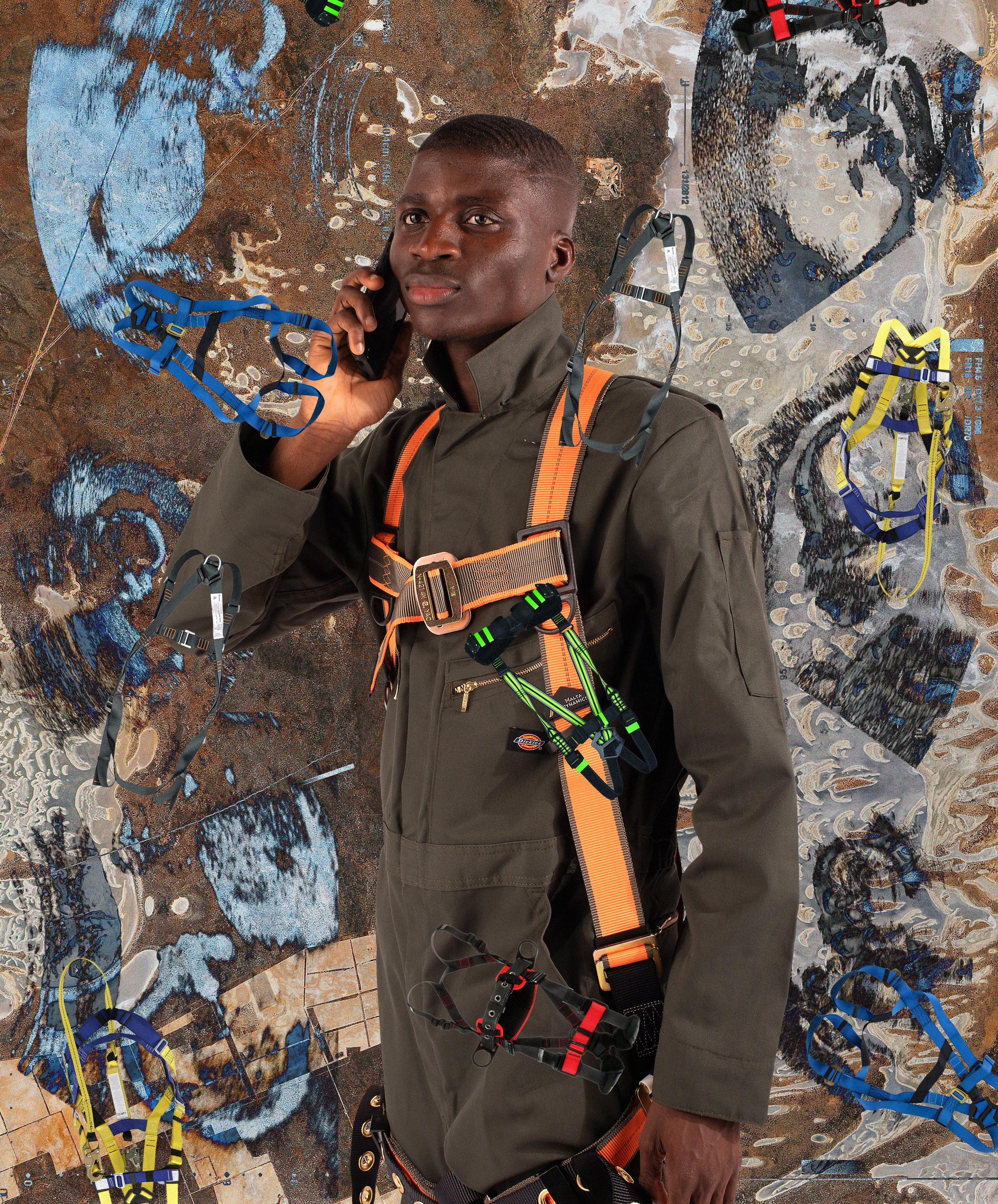 Walker Reader Filed to The Gradient · Part of
"Labors" collage, Ryan Gerald Nelson with photography by Bobby Rogers, from the Designs for Different Futures exhibition catalogue

As part of the Walker's presentation of Designs for Different Futures (on view now), we will be publishing a number of texts from the exhibition catalogue (Yale University Press, December 2019) exploring the ways in which designers create, critique, and question possible futures, big and small. The exhibition was organized by the Walker Art Center, Philadelphia Museum of Art, and the Art Institute of Chicago.

“The imagination creates the future,” writes Lewis Hyde, professor and author of the book The Gift: Creativity and the Artist in the Modern World.Lewis Hyde, The Gift: Creativity and the Artist in the Modern World (New York: Vintage Books, 2007), 252. This explains why we think of artists—whether “fine” artists or designers—as futurists. At the Institute for the Future we believe that the value of futures thinking is not in predicting the future (something no one can do), but in imagining possibilities of what the future could be. And if there was ever a time we needed such imagination, it is today. Mark Fisher, an academic and the creator of the blog K-Punk, has dedicated his energy to futures thinking, worrying that we are losing our capacity to “conceptualize a tomorrow that [is] radically different from our present.”See Hua Hsu, ”Mark Fisher’s ‘K-Punk’ and the Futures That Have Never Arrived,” New Yorker, December 11, 2018, www.newyorker.com. Who is better suited to imagining something that doesn’t exist, something that could be, something that we have neglected, than the artist?

As futurists we look for signals—small, often weird things. They are usually new technologies, new behaviors, new narratives that don’t fit into the mainstream, but that are often precursors of important transformations. We then try to discern the larger patterns that these signals herald to understand where they might lead ten or more years down the road. In many ways, this is also what artists do: look at the world around them, shine a light on things we might not recognize at first as significant, raise questions, and provoke us to reframe how we see the world, and how we think and act.

Twenty years ago we looked at the convergence of online communications, embedded sensors, and abundant data to foresee the transformation from episodic to continuous interaction among people in a social network. But already in 1962, Roy Lichtenstein recognized this convergence and its potential. His painting Portable Radio foreshadows a world in which you can carry music, news, and books everywhere you go—just strap on a radio, and carry it all with you.Lichtenstein’s painting is in the collection of the San Francisco Museum of Modern Art; see www.sfmoma.org/artwork/FC.604/.

Not only are artists able to spot signals and imagine future possibilities, their very practice—the way they live and engage in their craft—is a harbinger of how work is being transformed for many in today’s economy. Over the past ten years, a growing number of people have started earning a living as freelancers or gig workers, either full-time or as a supplement to formal employment. What artist is not familiar with gig work? Artists are the original gig workers—hired to do projects, perform at an event, or create something on spec without the stability and benefits that come with formal employment. While gig work has many advantages, including the flexibility to organize work around personal needs and desires, it can also be precarious and stressful. As a gig worker, unless you have a steady stream of projects or have made a name for yourself, allowing you to sell your work or labor at prices that ensure long-term security, you may go for long stretches without income. You also have to bear the costs of marketing and advertising yourself, paying for health insurance, managing your various tax obligations, and much more. The services and perks provided by an organization are not available to you. You have to be a one-person organization with your own infrastructure. Unless you are in the top one percent of artists or freelancers who have managed to build up enough assets, you are living without long-term economic security.

This is the dilemma uniting artists and many of today’s workers: flexibility and freedom on the one hand, precariousness and instability on the other. What previously was considered a choice and a luxury, something artists purposefully sought out and in some people’s eyes had to “pay a price for,” is now a reality for many other workers who don’t have a choice. Herein lies an opportunity for a new kind of solidarity—for artists to come together with Uber and Lyft drivers, TaskRabbits, and millions of others trying to survive in today’s economy. Together, we need to imagine a new economic system that provides long-term economic security for the majority, not just a few.

We see the UBA as a starting point and a guide to designing a new economic model, recognizing that returns in today’s economy are increasingly going to owners of assets (primarily stock and various other financial holdings), and not to wages. Median weekly earnings have grown a scant 0.1 percent a year since 1979.United States Department of Labor, Bureau of Labor Statistics, weekly and hourly earnings data from the Current Population Survey, 1979–2019, raw data accessed June 2019, www.bls.gov/webapps/legacy/cpswktab1.htm (all boxes must be checked and the output options set from 1979 to 2019).  The typical American family today has a lower net worth than it did twenty years ago.See Jesse Bricker et al., “Changes in U.S. Family Finances from 2013 to 2016: Evidence from the Survey of Consumer Finances,” Federal Reserve Bulletin 103, no. 3 (September 2017), box 3 (Recent Trends in the Distribution of Income and Wealth), fig. B (Wealth shares by wealth percentile, 1989–2016 surveys), www.federalreserve.gov/publications/. The UBA framework and manifesto point out that important assets are often passed on from generation to generation and thus have long-term impact on the prospects for socioeconomic mobility. Inheriting wealth provides a big leg up in life, and the lack of this advantage increasingly seals one’s fate in our society. Contrary to visions of the American dream, in which hard work inevitably leads to improvement in socioeconomic status, where you start on the economic ladder is most likely where you will end up. The UBA framework recognizes the importance of not only financial assets but also many other assets that are ignored by the market economy and are created by artists, caregivers, teachers, and civic leaders.

The UBA manifesto declares that every person deserves access to key resources needed for economic security and a healthy, productive life, from access to health care, education, and public transportation to infrastructure, community, knowledge, and so on.The pdf for the manifesto (see note 4) can be downloaded at www.iftf.org/uba. It is about creating business structures, policies, and investment mechanisms that promote more equitable access to these key resources. Instead of pursuing the dominant extractive forms of business, can we create more mutually beneficial businesses like cooperatives and employee stock-ownership plans (ESOPs)? Can we invest in public infrastructure in order to equalize access to assets and minimize the need to own them privately (more public transportation instead of more cars, driverless or otherwise)? In an era of union decline, can we create new ways to aggregate and empower the voices of the many who are excluded from existing power structures, both economic and political?

More equitable futures begin in the imagination, and we need artists more than ever before to lead us in imagining and building them. ▪︎

MARINA GORBIS is executive director of the Institute for the Future (IFTF), the world’s longest-running futures-thinking organization, based in Silicon Valley. Her current research focuses on transformations in the world of work and new forms of value creation. Most recently she launched the Workable Futures Initiative at IFTF with the aim of developing a deeper understanding of new work patterns and prototyping a generation of “Positive Platforms” for work.

The catalogue was produced by the Philadelphia Museum of Art, with design by the Walker Art Center. It was edited and conceived by the exhibition’s curators: Emmet Byrne, Design Director and Associate Curator of Design, Walker Art Center; Kathryn B. Hiesinger, The J. Mahlon Buck, Jr. Family Senior Curator and Michelle Millar Fisher, formerly The Louis C. Madeira IV Assistant Curator in the department of European Decorative Arts after 1700, Philadelphia Museum of Art; Maite Borjabad López-Pastor, Neville Bryan Assistant Curator of Architecture and Design, and Zoë Ryan, formerly the John H. Bryan Chair and Curator of Architecture and Design, the Art Institute of Chicago.

Text and compilation © 2019 Philadelphia Museum of Art, Walker Art Center, and The Art Institute of Chicago