Out of Line: Nicholas Galanin Rejects the Traditional/Contemporary Binary
Skip to main content

Out of Line: Nicholas Galanin Rejects the Traditional/Contemporary Binary

As an artist, Nicholas Galanin has utilized a wide range of tools and techniques and tapped into influences from conceptual art, pop culture, indigenous philosophy, protest, and his Tlingit and Unangax̂ (Aleut) ancestry. Born in Sitka, Alaska, the artist’s work is often characterized as a fusion of elements found along a continuum between tradition and contemporaneity: he’s modified an AR-15 rifle with Tlingit hand-engraving, carved walnut, and a hand-sewn sea otter strap; a photomontage pairs a 1906 Edward Curtis image of a young Hopi-Tewa woman with a photo of Carrie Fisher as Star Wars’s Princess Leia; a taxidermied polar bear rug is clad in an American flag; his music, created as part of the trio Indian Agent (with Otis Calvin III and Zak Dylan Wass) melds hip-hop, experimental, and electronic sounds with stories and sensibilities from its members’ Indigenous, African, and European backgrounds. But it’s a premise he rejects: the “tradition versus contemporary” binary, he argues, is more about settler pain than about his own reality as an indigenous person, artist or otherwise, living today. 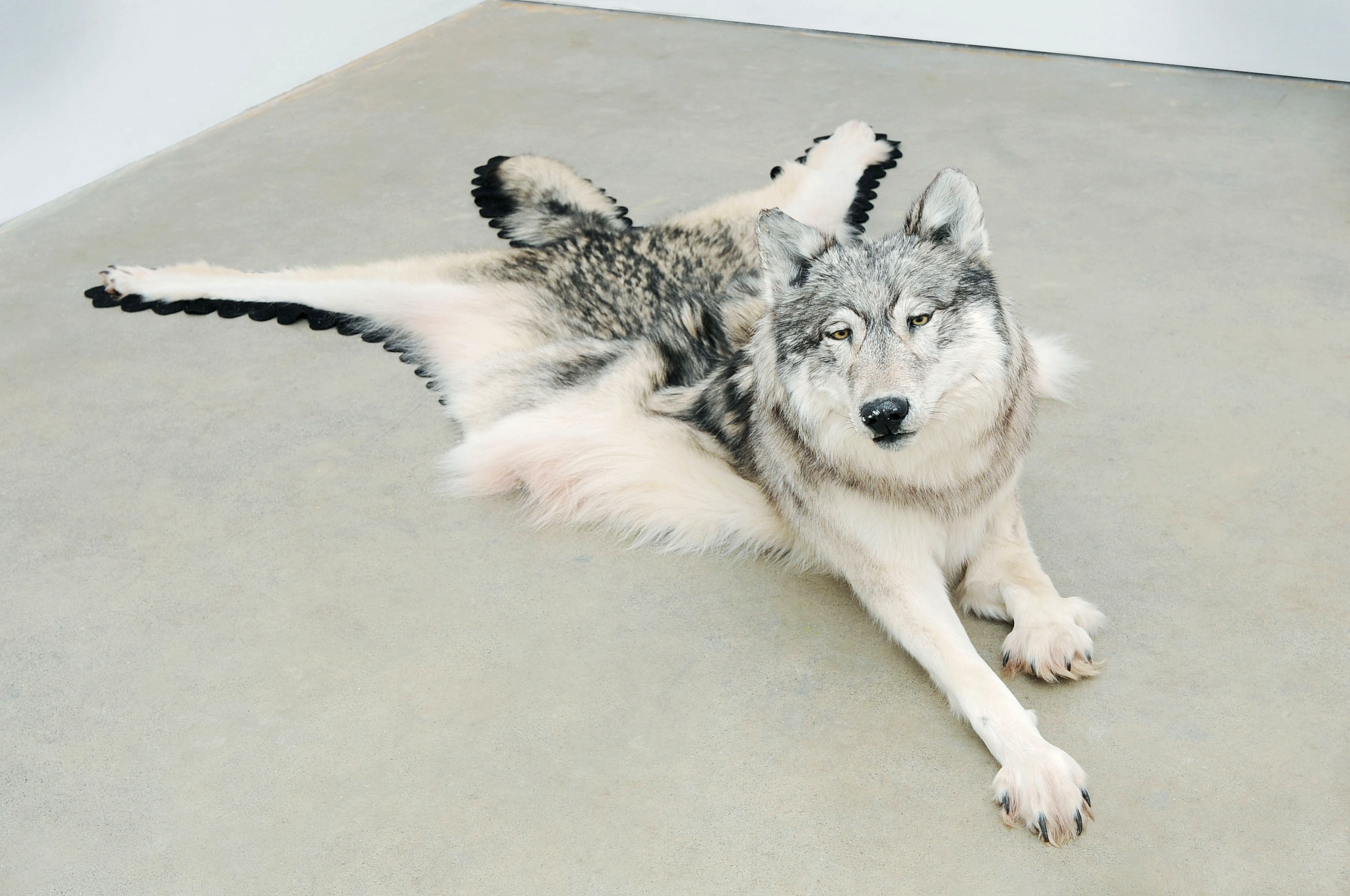 In advance of his March 28 artist talk at the University of Minnesota and his participation in the March 29 Walker panel discussion, we share Galanin’s Walker Reader commission on this oft-perpetuated and false dichotomy.

I have the immense joy and honor to participate in the continuum of Tlingit culture, creating from a position of independence and interdependence. Settler society attempts to categorize and compartmentalize work by artists of Indigenous descent. In doing so, lines are invented according to percentages, materials, processes, and dates strategically selected to limit who and what we are told we can be and how we should function.

I refuse to separate the intricacies of Indigenous culture and community to maintain authority for colonial and settler institutions or agendas. Stereotypes and romanticization of Indigenous people are rooted in centuries-old justifications for genocide which have been continued via blood quantum and ethnicity based on percentage. We are the only community in the United States that resides in part in internment camps (reservations). We are the only community in the United States whose blood percentage is monitored to determine if we are registered with the Bureau of Indian Affairs by a number. I challenge those who view or listen to my work to consider that Indigenous people are not contained by colonial mechanisms designed to erase our existence through continually narrowing categories of Indian-ness.

Early assertions that we were primitive, uncivilized people in need of white saviors and religion were used to advocate for our physical destruction. When such destruction was not possible, efforts turned toward destroying our cultures, removing us from the land, dividing our communities and forcibly removing our children. Today, due to the partial success of these violent and sustained efforts to remove, disperse, and dilute our cultures and communities, the attempt to control and erase us is based on grading and categorizing how closely we match the characters written into settler accounts of our ancestors. A viewer’s position and participation in engaging my work reveals more about them and the culture they come from than it does about who I am or the cultures I continue to shape.

The process of channeling ideas and knowledge into physical form has been practiced by Indigenous communities for as long as we have existed. We create canoes to connect our communities with ceremony, to subsist and feed our people. We create drums and songs to  heal, masks to dance stories and ceremony. Our creative output is visual, and our spoken language is not separated by materials of process, by museum or gallery standards, by anthropologists or art historians. My work holds stories, ideas; it documents and reflects the world. My works teach and tell histories, based on my relationship to land and communities.

Tradition is not defined by anthropologists, art historians, or institutions. Tradition is an English word that speaks to continuum. For me, the continuum of Indigenous ways of being is embodied in giving, in living respectful of land and water. Conversations around “tradition versus contemporary” are tired, from where I stand; they continue to reinforce and accept the division of the two as a form of control. Those insistent on continuing these conversations continually ask me to differentiate and divide my work using this boundary, to impose this line on my creative practice. It’s problematic and absurd to classify “traditional” as a pure and selfless maker creating solely from experience of Indigenous culture, materials, and processes that predate colonization and “contemporary” as the personification of western individuality embodied in an Indian Artist creating with any and all materials available and usually labeled as a shapeshifter. It seems that this absurd insistence to imagine and create “tradition versus contemporary” in living/contemporary artists is responsive to settler pain, a pain that is real but non-guiding. Settler pain and discomfort with the continued existence of Indigenous people as thriving post-colonization and post-settlement does not define who we are, what we do, or how we dream as Indigenous people. Settler pain deserves none of our energy or magic, though we continue to give, share, and teach in the wake of so much theft and destruction because we continue to recognize that we are all connected.

This line placed before me when presenting this conversation of “tradition versus contemporary” may seem fixed and solid to those who invent, believe, and enforce it. For me this line moves, disappearing and reappearing, shifting constantly in attempts to contain or disrupt the flow of creation and culture through categorization—attempting to control and exert power through variable exclusion or inclusion. Like colonial national borders cutting through land and people who have lived here longer than those invented lines, these lines drawn through creative production are also an attempt to control. I actively resist the authority of settler culture to define who I am or what I do. I resist the internalization of these lines and division in Indigenous communities, and work to affirm connection with land among all living things in everything I do.