Program Notes for Zeitgeist and Friends: The Music of George Lewis
Skip to main content

THE MUSIC OF GEORGE LEWIS 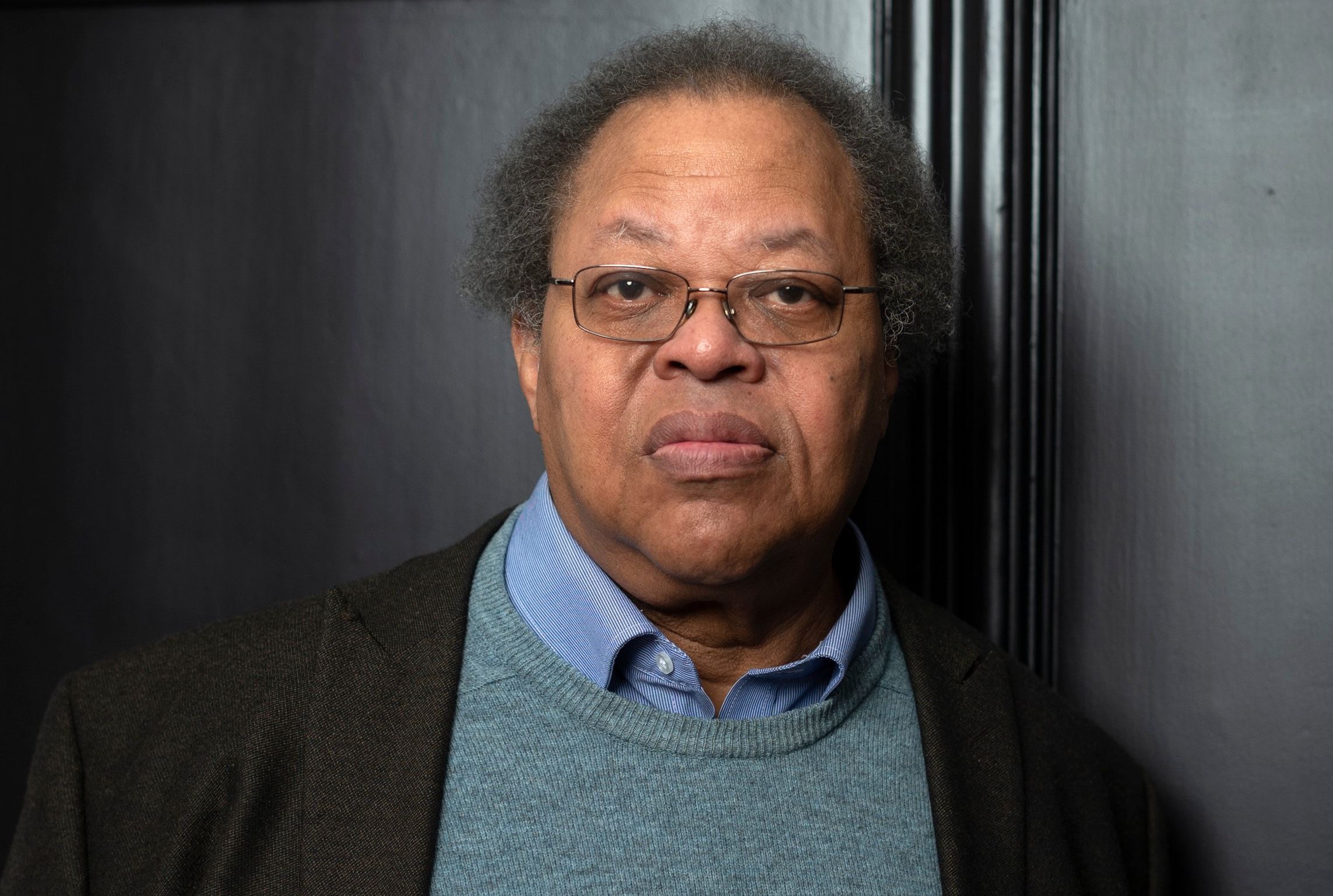 Shadowgraph, 5 (1977) is the last in a series of works for “creative orchestra” that I made between 1975 and 1977. The title is borrowed from Danish philosopher Søren Kierkegaard’s essay, “Shadowgraphs: A Psychological Pastime,” part of his two-volume work, Either/Or (1843). There is no centralized score for this piece, and no conductor is needed. Instead, for each part there is a set of instructions, laid out on a grid, from which one can select tasks more or less according to volition. The piece is designed for large ensemble, and the parts refer to membership in instrumental groupings: voice, woodwinds/saxophones, brass, piano/keyboard, strings, and percussion. Any number or combination of performers can take part, and each part can also be deployed in solo performance. The duration of the piece is determined by real-time, sonically determined negotiation and consensus within the ensemble. The work was composed for the AACM Big Band.

The first two books in Chinua Achebe’s “African Trilogy,” Things Fall Apart and No Longer At Ease, provide a touchstone for engaging with Interregnum. While Achebe confronts the consequences of social conflict and human aspiration under the colonial yoke, Interregnum continues my own contemporary engagement with the struggles over decolonization and creolization in contemporary music and culture more generally, as well as being one of a number of pieces I have composed under COVID-19 pandemic conditions. Under such conditions, we are indeed no longer at ease.

The aim of this music is to remind its hearers of our endemic condition of indeterminacy and instability, fostering not only a subliminal psychological discouragement of complacency, but also a celebration of mobility that migrates beyond the sounds of the piece to the consideration of larger issues in our lives. The title closely tracks the work’s strategy: evoking disruption and breakdown—but also suggesting opportunity.

Interregnum was commissioned by Zeitgeist and The Walker Art Center, and I am thrilled to be working with this extraordinary ensemble.

Artificial Life 2007 is designed to realize a model of group improvisation as an emergent phenomenon based on negotiation and local intelligence. The moment of execution and the kind of sounds and silences produced are chosen according to the improvisors’ considered judgment unless an instruction indicates otherwise; structural components and sonic gestures are designed to proceed from the use of intuition and snap judgment, obviating any need on the part of the performers to articulate or impose global form or spurious teleologies. As with all improvisations, including our everyday-life human efforts, the performance is achieved through negotiation and consensus, and its success will be less a question of individual freedom than of the assumption of personal responsibility for the sonic environment. The work was created for the Glasgow Improvisers Orchestra under a commission from the Scottish Arts Council, and received its premiere in December 2007 at the Institute of Contemporary Arts, Glasgow.

Calder (2015)
Version for three or more percussionists, woodwinds, and piano

As its title implies, Calder is a mobile, situational form work for three or more percussionists in which performers explore a hybrid physical/conceptual environment via improvisation and indeterminacy. The physical component consists of the bodies of the participants, who animate a set of percussion instruments that are positioned widely apart on stage to enhance the impression of acoustic space. For the conceptual component, the performers execute instructions from a set of 70 task cards, shuffled and stacked on three small tables prior to performance. The cards serve as a toolbox that encourage the performers to create personalized versions of the work that will inevitably exceed what the composer would imagine. The duration of the work is up to the performers.

“Situational form” means that in contrast to the widespread belief that the lifeblood of improvisation lies in not thinking, or acting “spontaneously”, Calder asks that performers consider their actions in advance of making them, adjusting their initial sound-making actions to the current situation rather than making sudden, arbitrary contrasts. Nonetheless, Calder is non-teleological. As with my other works in this situational-form series, the success of the performance will be less a question of individual freedom than of the assumption of personal responsibility for the sonic environment. When performed well, Calder might feel like an evocation of the weather.

A NOTE FROM HEATHER BARRINGER

It started happening almost right away.

Way back in 1999, when Patti Cudd and Pat O’Keefe joined the band, Zeitgeist would gather for artistic meetings to plan for the upcoming year and dream about future projects. With frequency, someone would say, “You know, we should really get a piece from George Lewis.”

Both Pat and Patti had studied with Lewis at University of California- San Diego and introduced me to his music. His work, then and now, is complex, virtuosic, lush, and prickly, and rooted in Black American music and moving that tradition and all experimental music into new realities and possibilities. Throughout our history, Zeitgeist has commissioned an impressive body of work by some of our nation’s finest musical minds, including Terry Riley, John Cage, Frederic Rzewski, Eleanor Hovda, Fred Ho, Harold Budd, La Monte Young, Paul Dresher, and Chinary Ung. But, we didn’t have anything like the music of George Lewis. We knew we needed to commission him.

But it took a while.

Then, in 2018, Zeitgeist began a new commissioning project to celebrate our fifth decade. Titled DECADE FIVE, this project features new works by five internationally renowned composers that will build on our legacy and provide our audience with the varied musical experience that is American experimental music today. George Lewis’ name was at the top of that list, and was also a perfect vehicle through which to partner once again with the Walker Art Center (also co-commissioner of many works listed above). Philip Bither graciously agreed, as did George Lewis, and the evening we will experience together tonight began to take shape.

Early in our conversations with George, we determined that the new work created for Zeitgeist would be a fully notated chamber music work. Such a work would tap into Zeitgeist’s formidable chamber music skills and give us substantial musical grist upon which to direct our collective energies. Our new work, Interregnum, so fresh and new, is proving to be all we could have hoped for, and we have reveled in discovering its mysteries and possibilities in our rehearsals leading to this premiere.

Zeitgeist is also an improvising ensemble, and in the past decade, has created a tradition of presenting work that allows us to join forces with other improvisors in our community. Lewis’ masterful situational improvisational works would allow us to include the artistry of many other musicians within our artistic circle. For the past few months, Zeitgeist and our featured guests have been exploring each of these works together, discovering new ways to direct our improvisational energy through the lens of Lewis’ artistic vision.

This evening is a culmination of years of planning, and months of musical preparation, but is really just the beginning of Zeitgeist’s journey with this music. Zeitgeist and the many musicians featured on this program will most certainly continue to explore improvisation through Lewis’ situational improvisations, and this work will likely have an influence on new work our musicians create in the future. How could it not?

As to Interregnum, we know that Zeitgeist will perform this work dozens of times, and with each performance, the work will grow and deepen as we release it to our audience and receive it back again. That is a tremendously gratifying process, and we hope those of you here at the beginning will be able to hear Interregnum later in its life as well.

We are grateful to the Walker Art Center for partnering with us to commission this new work and present this event, and to George for writing us such a wonderful new piece and guiding us as we developed this music, and to our fellow musicians who have brought their artistry and imagination to the development process. We are grateful as well to all of the donors who have supported this work, and to each of you in the audience joining with us to witness the beginning.

GEORGE E. LEWIS is the Edwin H. Case Professor of American Music at Columbia University, where he serves as Area Chair in Composition and member of the faculty in Historical Musicology. A Fellow of the American Academy of Arts and Sciences and the American Academy of Arts and Letters, a Corresponding Fellow of the British Academy, and a member of the Akademie der Künste Berlin, Lewis’s other honors include a MacArthur Fellowship (2002), a Guggenheim Fellowship (2015), and the Doris Duke Artist Award (2019). In the 2020-21 academic year he was a Fellow of the Wissenschaftskolleg zu Berlin, and he currently serves as Artistic Director of the International Contemporary Ensemble.

Lewis studied composition with Muhal Richard Abrams at the AACM School of Music, and trombone with Dean Hey. A member of the Association for the Advancement of Creative Musicians (AACM) since 1971, Lewis's work in electronic and computer music, computer-based multimedia installations, and notated and improvisative forms is documented on more than 150 recordings, published by Edition Peters. His work has been presented by ensembles worldwide, and he is widely regarded as a pioneer of interactive computer music, creating programs that improvise in concert with human musicians.

Lauded for providing “a once-in-a-lifetime experience for adventurous concertgoers,” ZEITGEIST is a new music chamber ensemble comprised of two percussion, piano and woodwinds. One of the longest established new music groups in the country, Zeitgeist commissions and presents a wide variety of new music for audiences in the Twin Cities and on tour. Always eager to explore new artistic frontiers, Zeitgeist collaborates with poets, choreographers, directors, visual artists and sound artists of all types to create imaginative new work that challenges the boundaries of traditional chamber music. The members of Zeitgeist are: Heather Barringer, percussion; Patti Cudd, percussion; Pat O’Keefe, woodwinds; Nicola Melville, piano.

Commissioned by the Walker Art Center with support provided by the National Endowment for the Arts. Program support provided by Producers’ Council members Therese Sexe and David Hage.
The Walker Art Center’s Performing Arts programs are made possible by generous support from the Doris Duke Charitable Foundation through the Doris Duke Performing Arts Fund, the Andrew W. Mellon Foundation, and the National Endowment for the Arts.

Performing Arts programs and commissions at the Walker are generously supported by members of the Producers’ Council: Nor Hall and Roger Hale; King’s Fountain/Barbara Watson Pillsbury; Sarah Lutman and Rob Rudolph; Emily Maltz; Leni and David Moore, Jr./The David and Leni Moore Family Foundation; Annie and Peter Remes; Therese Sexe and David Hage; and Mike and Elizabeth Sweeney.
Walker Art Center
The following text field filters the results that follow as you type. Use Tab to access the results.
No results available