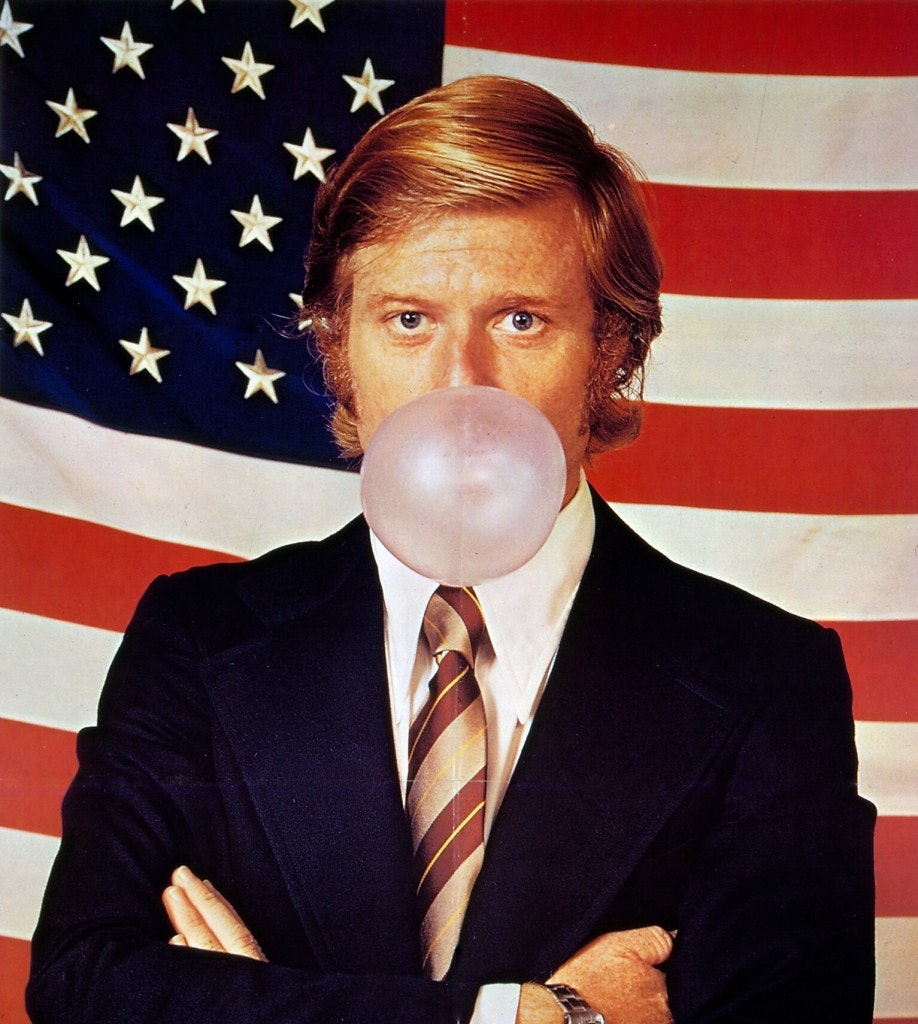 Robert Redford’s four-decade career has left an everlasting impact on American cinema. Redford is an actor, director, and environmental and political activist. He is also a founder of the Sundance Film Festival and Institute—a major proponent of independent cinema. Redford was propelled to stardom with the 1969 western Butch Cassidy and the Sundance Kid. In 1973, he starred again alongside Butch Cassidy costar Paul Newman in The Sting, a critical and commercial hit that earned Redford an Oscar nomination. In 1980, Redford turned his focus to directing, debuting his first feature Ordinary People (1980) to momentous success. Ordinary People won four Oscars, including Best Picture and Best Director for Redford. Redford has continued to star in, direct, and produce groundbreaking films while sustaining his political and environmental advocacy initiatives. The film icon is joined onstage by Amy Taubin, writer, film critic, and contributing editor for Artforum, Film Comment, and Sight & Sound, for an illuminating career retrospective. Recorded in 2016.

Amy Taubin is a contributing editor for Artforum, Film Comment, and Sight & Sound.

Over the past 40-odd years, there has been no more iconic a presence in the landscape of American cinema than Robert Redford. He is a multi-hyphenate: actor, director, producer, and the visionary founder of the Sundance Institute and the Sundance Film Festival. The metaphor of cinema as a landscape is particularly apt in relation to Redford, an environmental activist who has fought to conserve the wilderness of the west and who, in many of his films, depicts the land itself as the source of passions and values, action and contemplation—in short, of much that comprises American identity, both personal and collective.

One of the defining images of Redford, the actor, occurs about 50 minutes into George Roy Hill’s 1969 Butch Cassidy and the Sundance Kid, the film that made Redford a star. On the run from the law, Sundance (Redford) and Butch (Paul Newman) climb to the top of rocky ridge. We see a close-up of Sundance as he surveys the terrain below, and from his point of view we see a sweeping moving-camera shot of vast stretches of plains and hills, dappled by the sun. Sundance is on the lookout for their pursuers, but his gaze is also smitten by the beauty of the landscape. No actor other than Redford could have turned, however briefly, a bittersweet comedy about two charming bank robbers into a tragedy of disenfranchisement. Sundance’s tragedy is to be exiled from the land he loves. The movie transformed the largely fictionalized story of outlaw buddies into a foundational myth of the west, not merely because Butch and Sundance were daring and outrageously handsome gunslingers, but because of the truth that Redford brings to Sundance’s impossible desire to be one with the land.

In the early 1960s, Redford bought a few acres in Utah’s Wasatch Mountains. Compelled by the beauty of this site, he used his movie star wealth to gradually expand his Sundance holdings and his movie star fame to attract private and public sponsorship for the Sundance Institute and slightly later for the Sundance Film Festival. American independent filmmaking did not begin with the founding of the Sundance in 1981, but the infrastructure that Redford created enabled filmmakers to survive outside the corporate structure of Hollywood and brought films that the studios never would have made to an ever increasing audience worldwide. It is not an exaggeration to say that within 35 years, Redford’s vision for Sundance and his dedication to independent filmmaking has recast film culture in America.

In that sense, the two strands of this retrospective, “Sundance Film Festival at the Walker” and “Redford at the Walker” are inseparable. The Sundance festival films, many of them workshopped in the Sundance labs, suggest the enormous range of independent cinema, documentary and fiction. Almost all of them reflect Redford’s commitment to regional filmmaking and to the depiction of cultural, ethnic, racial, and gender diversities that continue to be either ignored or homogenized in Hollywood product.

What is most striking about the series of films in which Redford is either director or star is that so many of them are both specific to their historical moment and stunningly relevant to the way we live now. Watching Alan Pakula’s 1976, All the President’s Men, the adaptation of Bob Woodward and Carl Bernstein’s book about their investigation of the Watergate scandal and the fall of the Nixon administration, one can’t help thinking that corruption and spying at the highest levels of government is now taken for granted and the buying of elections has been institutionalized by the Supreme Court, while the kind of time consuming, carefully sourced investigative journalism practiced by two rookie reporters (played by Redford and Dustin Hoffman) and their editor at the Washington Post is all but dead in the age of Google algorithms. Watch All the President’s Men and weep.

Baldly apropos of this presidential election season is Michael Ritchie’s 1972 The Candidate, which Redford developed and in which he plays a liberal California community organizer who reluctantly allows himself to be drafted into running for the Senate against a conservative incumbent. Promised that he could campaign on his own beliefs and policies, he gradually succumbs to the strategies of his campaign managers. In winning the race, he loses himself. The film concludes with him asking, “What do we do now?” It is the same line that ends the 1969 Downhill Racer, Redford’s earlier collaboration with Ritchie. There he played an ambitious skier from a poor family who sees an Olympic victory as his route to money and fame. Redford’s character is driven, self-involved but not personally corrupt; rather it is the sport itself that is corrupted by its all-consuming focus on winning.

Of the nine feature films Redford has directed, only two are represented in this series. He debuted as a director with the 1980 Ordinary People, a subtle, uncompromising depiction of an emotionally troubled upper-middle-class Midwestern family. It was a surprising choice of subject for an actor largely defined as an action hero, albeit a somewhat conflicted and introspective one. In Ordinary People, Redford focused on what had been wrongly ignored in his own performances, the inner turbulence and damaging repression beneath a graceful, assured presentation of self. The nuclear family, riddled with secrets and lies, is implicated in the hypocrisy and mendacity that is institutionalized in every area of American society.

One of those institutions is television. Redford’s most brilliant film as a director is Quiz Show (1994), as cogent an exposé of the deceit that continues to afflict American society today as All the President’s Men. (So too is a film not included in this series, the 1975 espionage thriller Three Days of the Condor, directed by Sydney Pollack, which stars Redford as a low-level intelligence gatherer forced to become a whistleblower when he discovers the existence of a rogue spy network that goes all the way to the top of our national security agencies.) Quiz Show is based on the late 1950s scandal around the game show Twenty-One, which mesmerized viewers who disavowed what was blatantly in front of their eyes—that the contestants were coached in their every gesture and given the answers in advance. Neither the sponsors of Twenty-One nor NBC, the network which aired it, suffered legal consequences. Indeed, the lesson that was learned—the reason that Quiz Show hits home today—is that audiences don’t care how honestly a game is played, they just want to glom onto a winner. There is a direct line from the quiz shows of the 1950s to the “reality” shows that have saturated 21st-century television and have produced a presidential candidate whose falsehoods are accepted as truth by surreal numbers of Americans because it entertains them to do so.

Yes, Redford, the golden boy romantic hero, has turned out to be one of our most hard-hitting political filmmakers. But there are at least two movies in which Redford stars where politics and social relations recede into the background. In Pollack’s 1972 Jeremiah Johnson, Redford plays a 19th-century survivalist, who goes alone into the wildness and learns how to live off the land. The film is something of a visual tone-poem in which the forests and rock cliffs of the west deserve equal billing with Redford’s “mountain man.” The existential struggle between man and nature is even more radically drawn in V.J. Chandor’s 2013 All Is Lost, a film that calls on Redford’s polar-opposite strengths as an actor—his athleticism and his ability to draw the viewer into a character’s inner life without uttering a word. Chandor gave him the role of a lifetime and Redford threw his then-76-year-old mortal body, his actor’s intelligence and experience, and his personal convictions into a character identified in the credits merely as “Our Man.” Alone and adrift in the Indian Ocean after an errant cargo container rams his yacht, he marshals strength, will, ingenuity, and perseverance in the struggle to survive against the forces of nature (albeit polluted by global capitalism) even as his efforts are rendered null by one crisis after another. All Is Lost is a film of exceptional purity—a thrilling distillation of the action movie, of great movie acting in all its virtuosity and mystery, and of the daring of Robert Redford, going into uncharted waters to bring the vision of an inspired novice director to the screen.