Amiri Baraka at the Walker
Skip to main content 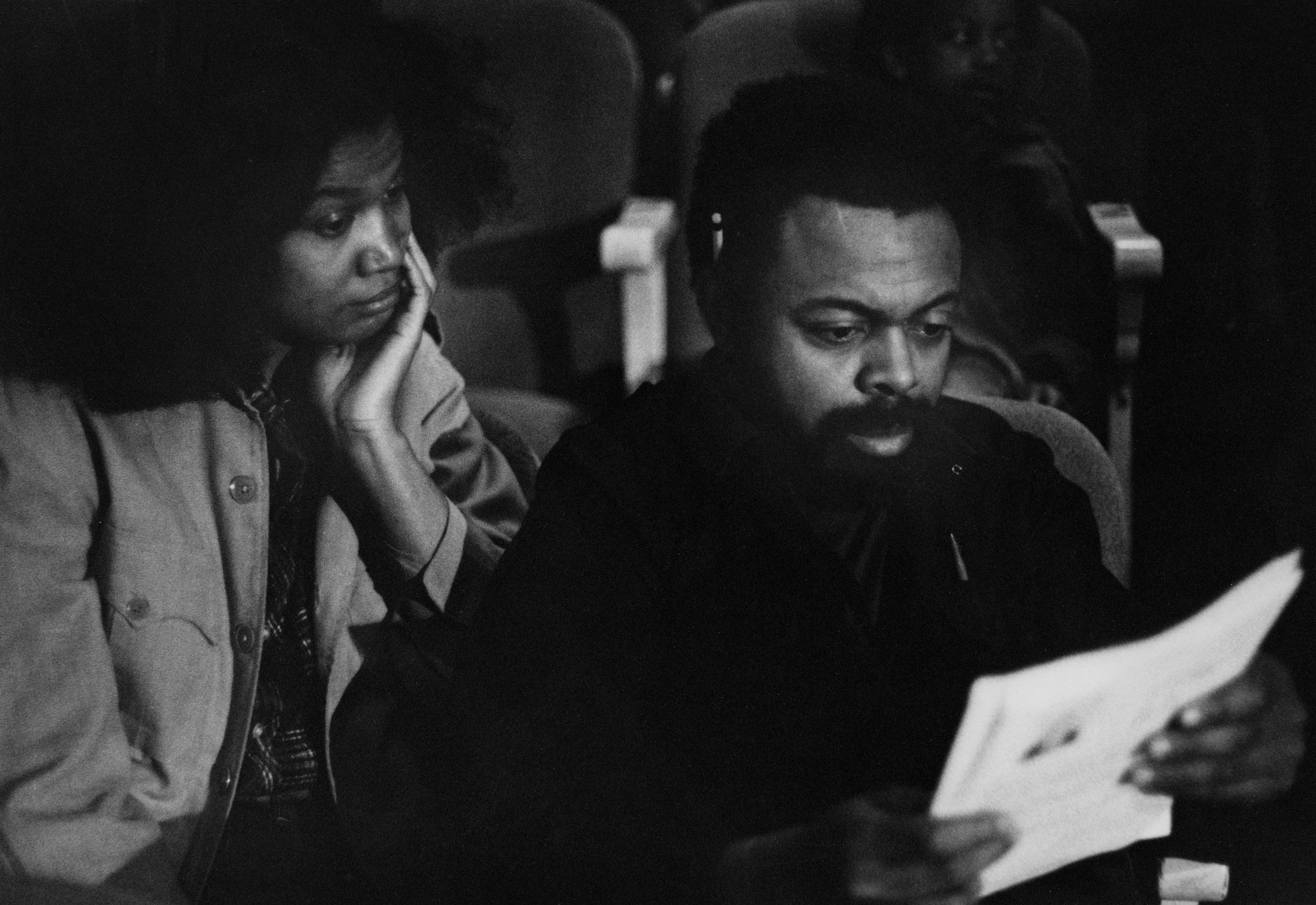 It was a long, hot summer. And the Newark riots—one of 159 race riots that erupted in the United States throughout the summer of 1967—plagued New Jersey City in mid-July. With struggles lasting nearly a week, twenty-six people died and hundreds (some sources say even thousands) were assaulted, including poet, playwright, critic, and social activist Amiri Baraka (US, 1934–2014), who was hit over the head with a gun and beaten. The fuse for the bloody upheaval was ignited when white officers beat a black cab driver in their custody. A crowd congregated and surrounded the Newark precinct like a reckoning, arguably an outcrop of tensions nationally as seen in Jersey City, Harlem, Detroit, and the Watts neighborhood of Los Angeles, among others. Sentenced in 1968 on a charge related to the riots (a conviction that was reversed the following year), Baraka was singled out by then police director Dominick Spina.“Long Hot Summer” is typically used to describe the race riots of 1967. In 2012, Baraka describes the Newark race riot (July 12–17) in great detail to journalist James Barren. See James Barren, “A Poet Looks Back on a Bloody Week in 1967,” Newark Journal, October 10, 2012, https://www.nytimes.com/2012/10/11/nyregion/amiri-baraka-newark-poet-looks-back-on-a-bloody-week-in-1967.html.

One night, while locked up in solitary confinement, Baraka whistled as many John Coltrane tunes that he could conjure in his mind’s eye—an echo that glided down the prison block’s lonely corridor (his love for the saxophonist was undisputed and nurtured by his proximity to the Five Spot Café).Calvin Reid, the senior editor of Publisher’s Weekly, interviewed Baraka, who discusses how he lived over the Five Spot Café at a time when painters, musicians, and writers were occupying the same space. Thelonious Monk and Coltrane, who recorded an album in 1958, had a four-week gig at the venue, where they played every night. See Calvin Reid, “Winning the Hipster’s Lottery: An Interview with Amiri Baraka,” in Black Music (Brooklyn: Akashic Books, 2010), 210. Later that same afternoon, after blowing a symphony of cacophonous syllables delivered spasmodically to replicate jazz rhythms, for what I imagine to be hours, an officer entered and told Baraka that the celebrated avant-garde musician had died.See Amiri Baraka, “On Reissuing Trane,” in Digging: The Afro-American Soul of American Classical Music (Chicago: University of Chicago Press, 2009), 183. “Trane,” as he was affectionately known, had died. The 40-year-old creator of A Love Supreme—Coltrane’s 1965 studio album that continues to garner praise and dropped two years after his mournful meditation Alabama, a composition created in response to the 16th Street Baptist Church bombings—had succumbed to liver cancer.On Sunday, September 15, 1963, the Ku Klux Klan bombed the 16th Street Baptist Church in Birmingham, Alabama, killing four black girls (Addie May Collins, Carol Denise McNair, Carole Robertson, and Cynthia Wesley) in the crossfire.

“I Love Music (for John Coltrane),” a poem written by Baraka to recount the aforementioned events, follows his poem “The Last Revolutionary (For Abbie Hoffman),” at a reading presented in the early 1980s at the University of Minnesota in Minneapolis, in conjunction with the Walker Art Center. (Baraka would later return to the Walker in 1983 for the program Words Worth, an investigation of the language arts, and again in 1996 for an event in association with the University of Minnesota jazz studies program.) The rhyme is taken from Baraka’s 1982 LP New Music-New Poetry, where in his liner notes he declares that poetry is a musical form, “speech musicked,” emphasizing that its natural medium is the sound recording.See the review Steven Tracey, “New Music: New Poetry by Amiri Baraka, Steve McCall,” MELUS 9, no. 1 (Spring 1982).

Baraka begins the poem with a quote by Coltrane: “I want to be a force for real good. In other words, I know that there are bad forces, forces that bring suffering to others and misery to the world, but I want to be the opposite force. I want to be the force which is truly for good.” The poet, with a pulsating cadence, fires off:

Trane
Trane
Trane said,
A force for real good, trane. In other words, February ’67
By july he was dead.
By july. he said in other words
he wanted to be the opposite
but by july, he was dead, but he is, offering
expression a love supreme, afro blue in me singing
it all because of him
can be
screaming beauty
can be
afroblue can be
you leave me breathless
can be
Alabama
I want to talk to you
my favorite things
like Sonny
can belife itself, fire can be, heat explosion, soul explosion, brain explo
sion. can be. can be. can be. can be. can be aggeeewheewheeagg eeee. aggeeouhy
deep deep deep …Baraka, “On Reissuing Trane,” 183.

Melodically and rhythmically, here you see a poet’s deep admiration for a saxophonist (as well as blues and jazz rhythms)—an outward expression of lyricism. Baraka engaged with Coltrane through his music, writing, and performances, at times even noting him as one of the “jazz avant-garde,” alongside musicians Ornette Coleman, Cecil Taylor, Eric Dolphy, and Wayne Shorter, to name a few.

Beyond being an activist who conjoined black nationalist and Marxist-Leninist philosophies to offer a strategy to approach social problems, Baraka understood black music as a force for social change, highlighting a connection to radical black politics fueled by jazz improvisation. In his music writings Blues People (1963) and Black Music (1967), the artist noted that black music had its own inherent kinetic philosophy and has over the years become a road map for many scholars.See LeRoi Jones (Amiri Baraka), Blues People: Negro Music in White America (New York: Harper Perennial, 1999) and Black Music (New York: Akashic Books, 2010; reissue edition). A fundamental call in black music has been freedom—its sound carries ideas and does not require lyrics to be heard or to anoint. And music that has its roots in struggle drenches over us—think of Abbey Lincoln abusing her voice in the seminal civil rights rally Triptych: Prayer/Protest/Peace, a duet with Max Roach,Similar to his engagement with Coltrane, Baraka wrote extensively about the influential drummer and composer Max Roach (US, 1924–2007). Baraka was Roach’s biographer and also delivered the eulogy at the musician’s funeral, during which he read “Digging Max,” his poem written on the occasion of Roach’s 75th birthday. to conjure the spirit and pain of the civil rights movement.

Amiri Baraka, “Not a White Shadow But Black People Will Be Victorious (For Black Arthur Blythe)”

Amiri Baraka, “Not a White Shadow But Black People Will Be Victorious (For Black Arthur Blythe)”