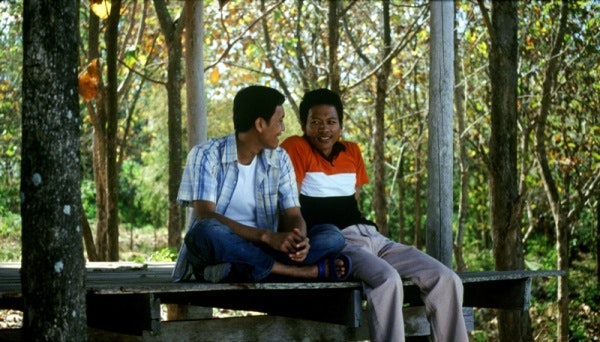 Thai filmmaker Apichatpong Weerasethakul has gained attention worldwide for his artistic and groundbreaking experimental films. His first major feature, Mysterious Object at Noon (2000), received critical acclaim. The director’s next works, Blissfully Yours (2002) and Tropical Malady (2004), both garnered prizes at Cannes, the former winning the Un Certain Regard prize and the latter winning the Jury Prize. Despite pushback from Thai government censors, Weerasethakul continued to make films with controversial content, including those giving voice to ordinary people. At the Walker Art Center, the director and Bangkok-based arts journalist Chuck Stephens gather to reflect on Weerasethakul’s filmmaking achievements. Stephens is a contributing editor for Film Comment, film critic for the San Francisco Bay Guardian, and an occasional contributor to the LA Weekly, the Village Voice, and Cinema Scope. Recorded in 2004.

At the Walker Art Center, director Apichatpong Weerasethakul and Bangkok-based arts journalist Chuck Stephens, gather to reflect on Apichatpong’s filmmaking achievements. Stephens is a contributing editor to Film Comment, film critic for the San Francisco Bay Guardian, and an occasional contributor to the LA Weekly, the Village Voice, and Cinema Scope.

The first thing you should know about Apichatpong Weerasethakul, the internationally recognized and extremely talented young experimental filmmaker from Thailand, is that he’s perfectly aware how strange and probably overwhelming it must be, particularly for Western audiences, not only to pronounce his name, but to process all that information about who and what he is. After all, even if you know something about Thailand, or something about experimental cinema, how much could anyone reasonably be expected to know about Thai experimental cinema—or even that it existed in the first place? (It does, if only barely so.) But Apichatpong’s an extremely modest and obliging fellow, and he’s come up with a simple way to get you started: he tells you to call him “Joe.”

The second thing you should know about Joe is that, whatever difficulties Western audiences may face when they first begin watching his increasingly strange and sensual feature films—a docu-fiction hybrid about migratory behavior and the art of storytelling called Mysterious Object at Noon, an Edenic love story infected with a mysterious skin rash called Blissfully Yours, and a shape-shifting gay romance about a soldier and tiger titled Tropical Malady—audiences in Thailand seemed just as perplexed by the cinema of their native son. In fact, it wasn’t until Tropical Malady—the first Thai film ever invited for competition by the Cannes Film Festival—returned from France with a Special Jury Prize in hand that audiences in Bangkok actually began to pay Joe and his movies the kind of attention that the rest of the world already knew he deserved. Indeed, Mysterious Object at Noon—despite being filled with ineluctably Siamese meditations on Thai soap operas, love songs, talk shows, and children’s stories—never had a theatrical or DVD release in Thailand at all. And while Blissfully Yours, in part due to several scenes of explicit sexual congress, was predictably cut to shreds by the Thai censors before its blink-and-you-missed-it theatrical playdate at home, the Thai DVD release of the film seems to suggest that it isn’t just Joe’s sexual candor that sticks in his hometown moviegoers’ craws; apparently, some find his ardor for languorous artistry equally difficult to endorse. How else is one to explain the fact that the Blissfully Yours DVD doesn’t just delete those sex scenes, but an extremely tender episode where two fully-clothed adults spend a few minutes picking berries in the woods as well?

Joe sometimes likes to tell people that his films are really pretty simple, or that ultimately, they’re actually “about” nothing at all. He’s being modest again. But statements like those do lead to the third, and perhaps most important, thing you should know about Joe and his cinematic realm of multilayered narratives, constant genre-morphing, and fantastic creatures large and small: the best way to approach them is with your eyes wide open, childlike in your willingness to welcome the weird and sometimes wholly inexplicable turns of events you’ll encounter in them, and ready to allow them to unfold in what at first may seem like an almost otherworldly state of drifting, lingering time. The reality is, Joe’s films are anything but simple—they’re subtle and complex, darkly erotic and emotionally overpowering, and sometimes so teeming with ideas as to seem almost terrifyingly so. To say that Apichatpong Weerasethakul’s movies are everything modern cinema could and should be is too modest praise. The truth is, they’re way out in front of modern cinema, showing it—and us—the way to go.

Chuck Stephens is a contributing editor to Film Comment, film critic for the San Francisco Bay Guardian, and an occasional contributor to the LA Weekly, the Village Voice, and Cinema Scope. He lives in Bangkok.