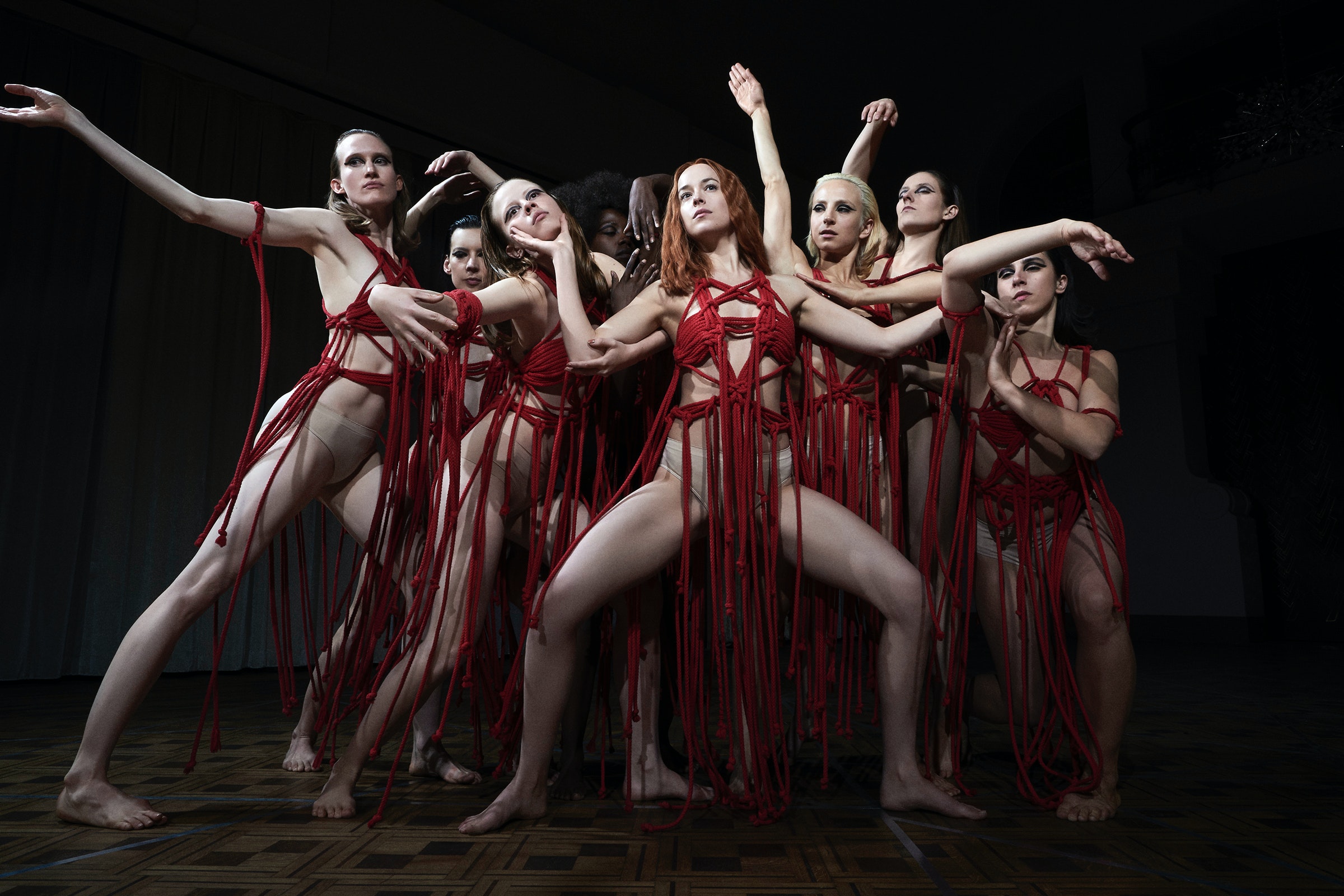 Filmmaker Luca Guadagnino is known for his deeply personal, emotional, and intimate films. He broke onto the international film scene with the romantic drama I Am Love (2009), followed by A Bigger Splash (2015). In 2017, Guadagnino released his romantic coming-of-age film Call Me by Your Name, which met with widespread acclaim. The director’s newest film is Suspiria (2018), a revitalized take on Dario Argento’s 1977 horror film of the same name. He often collaborates with actress Tilda Swinton (The Protagonists, 1999; I Am Love, 2009; A Bigger Splash, 2015; and Suspiria, 2018). Guadagnino sits down with Scott Foundas for a conversation about his international film career, inspirations, and collaborations. Foundas, previously a programmer at the New York Film Festival and a chief film critic for Variety, is now a film acquisitions and development executive at Amazon Studios. Recorded in 2019.

Luca Guadagnino joins Scott Foundas for a conversation about his international film career, inspirations, and collaborations. Foundas, previously a programmer at the New York Film Festival and a chief film critic for Variety, is now a film acquisitions and development executive at Amazon Studios.

In filmmaking, as in all the arts, there are those creators whose brilliance shines brightly from the start—Orson Welles, Spike Lee, Godard—while others come more gradually to take their place on the world’s stage, whether because their own voices are longer in the forging or because we cultural guardians and gatekeepers are simply slower to hear them. To wit: Michael Haneke was nearly 50, with a long career in theater and television behind him, when his debut cinema feature (The Seventh Continent) screened at Cannes. Ditto Mike Leigh at the moment of his international breakthrough, Life Is Sweet. By comparison, Luca Guadagnino was a mere 38 when I Am Love screened at Lincoln Center and MoMA’s prestigious New Directors/New Films festival—though he, too, had already been working in film for more than a decade, with two narrative features, several documentaries and a bevy of shorts to his name.

But I Am Love felt like a debut, in the way it so forcefully announced a director both drunk on the possibilities of cinema and in total command of the medium. It was the sort of movie made as if its maker might never get another chance: a dizzying rush of images, sounds, scents, textures, tastes, all meticulously choreographed by Yorick Le Saux’s sinuously pirouetting camera and the crisp snap of Walter Fasano’s editing. And just as glorious as the movie’s shimmering surface was what lay beneath. We open in a snowbanked Milan (seasons—of both the meteorological and emotional variety—are a constant in Guadagnino’s films), where the wife (Tilda Swinton) of a wealthy textile baron finds herself growing ever fonder for a handsome chef young enough to be her son. There is a dinner banquet worthy of Visconti in its eye for the rituals of class (from the pouring of coup to the currying of favor) and, as in all of Guadagnino’s subsequent films, an acute feel for the tender and fraught bonds between parents and children. There is also a swimming pool that serves as a locus for both intimate confidence and betrayal—another Guadagnino constant. Above all is the sense of a specific, circumscribed society, at once beautiful and languorous, of this world and detached from it.

I Am Love was a smash—except, notably, in Italy, where Guadagnino has always been something of a cinematic outsider (just as, in life, he came to the country only at age 6, having been born and raised in Ethiopia). But having finally “arrived,” the director did not rush into his next feature, instead spending the next six years at work on two documentaries (including the superb Bertolucci on Bertolucci) and producing a fine debut feature, Antonia, for his partner in life (and frequent artistic collaborator) Ferdinando Cito Filomarino. When Guadagnino did return, it was with A Bigger Splash (2015), a sun-baked psychosexual drama in which overly tanned bodies sprawl in every direction under a heavy Pantellerian sky, desperate to reach out and touch someone. There was Swinton again—she and Guadagnino have made four features and a short together since 1999—regally dolorous as an androgyne rock star rendered mute by vocal surgery. No matter: her lack of words was more than made up for by Ralph Fiennes, whose Dionysian record producer enters the film in a logorrheic whir and doesn’t let up until fate stops him cold. It is an unhinged performance of the kind that only an actor in full trust of his director and his environs can deliver. It alone would be enough to recommend the film, though there is much more, too, in this typically Guadagninian study of the mysterious currents of desire and temptation.

By design or not, Guadagnino’s films can be seen to fold serially one into the next, like chapters in some ongoing magnum opus. Thus A Bigger Splash was the perfect aperitif for Call Me By Your Name, another summertime tale of love and loss, but with the wonder and innocence of adolescence substituted for the crueler machinations of adulthood. The movie was a critical darling and a cult phenomenon practically from the start: memed, lovingly parodied (not only for its famous act of produce-assisted auto-erotica) and binge-watched by the burgeoning fan club of its breakout star, Timothée Chalamet, who moves through his scenes with the electric fidgetiness of the young James Dean, River Phoenix, or Brando—as if all the roiling hormones and feelings inside him were contorting his lanky frame into a series of distressed positions. “Cinema is a mirror of reality and it’s a filter,” remarks one of the film’s characters (during a heated argument over Luis Buñuel)—an aside, perhaps, but also a clue for the audience. Indeed, the mirror Guadagnino places over reality is one that magnifies and distorts, like the funhouse of our own memories and imaginations. So although it lacks the overt framing device of André Aciman’s original novel, Call Me By Your Name feels unmistakably remembered—each gesture and touch, each wisp of summer breeze, made to feel momentous, indelible, life-changing; the beauty of it all rendered more intense by the fact that we know it will not last.

Call Me By Your Name ends in winter and discontent—and it is there that Guadagnino’s latest film, Suspiria, picks up. It is also the point at which this writer must abandon any pretense of impartiality, for I was the production executive who spent two years overseeing Suspiria on behalf of its co-financier and distributor, Amazon Studios. That experience afforded a close-up look at the high wire ambition of Guadagnino’s filmmaking, the familial atmosphere he cultivates on his sets, and the center of calm he creates for his actors no matter the drama that may be erupting just outside of the frame. In taking on the sacrosanct urtext of 1970s Italian giallo filmmaking, Guadagnino knew he was setting off down a path that, for some, would prove unforgivable. But he ploughed forth undeterred, and the result is, to these eyes, every inch the movie Guadagnino intended—less remake than reimagining, in which the real-world horrors of post-WWII Germany hold the characters in a more diabolical grasp than mere witchcraft ever could. But Guadagnino’s Suspiria is also, by turns, another coming-of-age story and even a tragic romance (or three). And though there is no swimming pool this time, there is a cavernous underground pit where innocence is lost and truth reconciled.

Guadagnino is now at that perilous moment in many an international auteur’s career where he is being courted by Hollywood studios with the kinds of offers that can sound tempting on paper but frequently end in tears and recriminations. Fortunately, he seems ever committed to charting his own course—one that now brings him to Minnesota, both for this week’s dialogue and for a film project inspired by Bob Dylan’s Blood on the Tracks album. The intention is to create a generational American epic in the spirit of those ’70s masterpieces The Deer Hunter and The Last Picture Show—a formidable challenge to be sure, but tantalizing in its potential. In a filmmaking landscape conspicuously short on big-canvas dreamers (at least when that canvas doesn’t include superheroes), we need Guadagnino’s grand—even occasionally grandiose—visions more than ever.