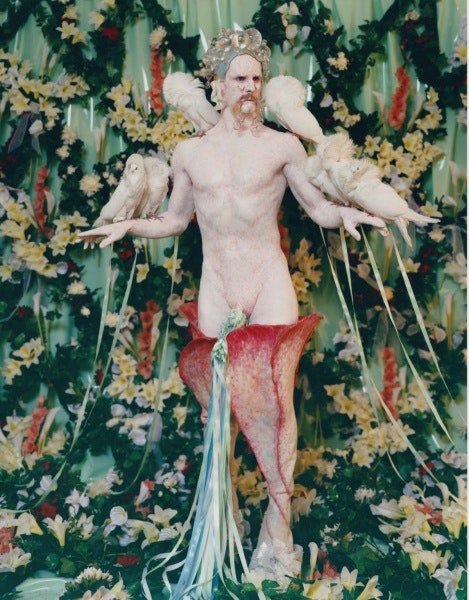 Matthew Barney’s name has become synonymous with works that push the boundaries of modern art. His Cremaster Cycle (1994–2002), a series of five films shot out of sequence, is no exception. The Cycle, a creation made over the span of eight years, is a meditation on Western religions, creation, mythology, and architecture. In addition to the films, Barney’s body of work includes photographs, drawings, sculptures, and installations. The artist is joined by Richard Flood, chief curator of the Walker Art Center, for a Dialogue featuring excerpts from several of his films. Recorded in 2003.

Matthew Barney, whose name has become synonymous with works that push the boundaries of modern art, is joined by Richard Flood, Chief Curator of the Walker Art Center for a dialogue featuring excerpts from several of his films.

Matthew Barney is an artist whose practice encompasses sculpture, performance, filmmaking, libretti, photography, drawing, rappelling, and nothing less than the creation of myth. The hybridity of his art was evident as far back as 1989 when, during his senior year at Yale, he made a mesmerizingly prescient video called Field Dressing, which established a vocabulary that informs his work to this day. Field Dressing, then and now, looks not unlike a documentary record of a taboo ritual in which the goal of the naked initiate is to return to a state of embryonic suspension. Clinging to ropes lowered over a mass of petroleum jelly, Barney repeatedly, exhaustively descends and ascends the ropes using the jelly to seal off one bodily orifice after another. The grueling athletic test of skill and stamina he set for himself in Field Dressing became an essential component in the five-part Cremaster film cycle begun in 1994 and completed in the summer of 2002. As important as the battle Barney continued to wage against his personal best was the decision to embed the cycle with a male biological absolute, the cremaster muscle. This muscle, after which the films are named, regulates a libido-free status of the testicles. Responding to such primal stimuli as fear and cold, the cremaster muscle retracts the scrotum into a simulation of its pre-gendered condition, that delicate moment before the sex chromosomes impose their directive. Within the Cremaster cycle there is a consistent narrative search for a karmic alignment wherein the status of the cremaster muscle provides the determination of balance and order.

The eccentricity of the cremaster conceit provides perfect entry for understanding the incredible fullness of the world Barney conjures up in the cycle. The films were, like Star Wars, shot out of order (4,1,5,2,3), traveling through time and across geographies. Each is populated by its own unique creatures and contests, quests and challenges. To achieve a mythic density, Barney draws from sources as disparate as Celtic legends, Mormon texts, Masonic rites, Oakland Raiders’ game strategies, Harry Houdini’s repertoire, and the crimes and redemption of a particularly American murderer, Gary Gilmore. In all of the Cremasters (except 1, which lays out the cycle’s biological conceits), Barney plays a protagonist in pursuit of his own self-realization; that pursuit (not always achieved) is attempted by engaging in a series of challenges. His auto-protagonists are cut from the same cloth as Oedipus or Parsifal or Luke Skywalker and similarly share that inherent human flaw of hubris. (It is worth noting that all of his work has found room for a consideration of hubris as both motivation and mortification.)

The primary characters surrounding Barney’s protagonists are father figures like writer Norman Mailer as a twilight Houdini and sculptor Richard Serra as the incarnation of Biblical architect Hiram Abif, or mother/lovers such as former Bond girl Ursula Andress as a melancholic queen, and paralympic champion Amy Mullins as a chimerical sphinx. Of equal importance are the films’ locations, which, in the cycle’s numerative order, proceed from Boise to Budapest. Miraculous topography like the crests of the Rockies, Utah’s Bonneville Salt Flats, Canada’s Athabasca Glacier, and the Isle of Man commingle with iconic “sets” like Boise’s Bronco Stadium, a rodeo arena constructed out of salt, the Chrysler tower, a Victorian pier jutting into the Irish Sea, and Budapest’s Gellert Baths. Every location functions as context and character, defining and determining the evolution of the narrative.

Each of the Cremasters is a stand-alone experience, but together they possess an intense, poetic coherence. They are part of a long cinematic history in which works as rich and strange as Fritz Lang’s Die Nibelungen and Stanley Kubrick’s The Shining are recalled in the same breath as Busby Berkeley’s Gold Diggers of 1935 and Sam Raimi’s Evil Dead 2: Dead by Dawn. For a multidisciplinary art center like the Walker, Barney’s literally fabulous fusion of art forms to create something breathtakingly new gives testimony to the continuing ability of art to transform both itself and its audiences.

Richard Flood is the Chief Curator at the New Museum of Contemporary Art. Before moving in to his current position, Flood was the Chief Curator of the Walker Art Center for over a decade. In 1999 he organized the exhibition Matthew Barney Cremaster 2: The Drones’ Exposition and the accompanying catalogue.