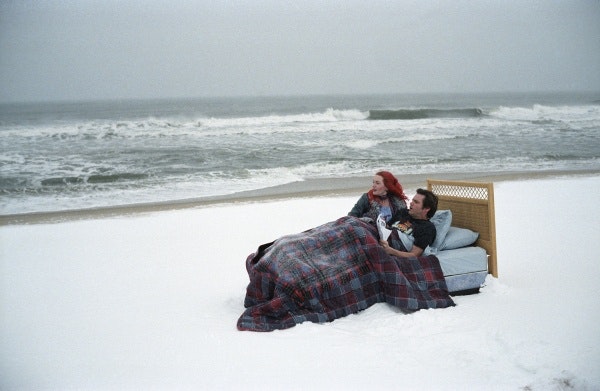 Part of
Eternal Sunshine of the Spotless Mind, 2004.

Michel Gondry, a French director, screenwriter, and producer, broke into mainstream media with innovative music videos for some of the era’s most influential musicians (Björk, Daft Punk, Radiohead, the Rolling Stones and the White Stripes—just to name a few). In 2001, he released his first feature, Human Nature, a preface to five other fantastical feature films. Gondry went on to direct Eternal Sunshine of the Spotless Mind (2004), for which he won an Academy Award for Best Original Screenplay. His latest releases are The Science of Sleep (2006) and Be Kind, Rewind (2007). Gondry is joined by Jonathan Rosenbaum, head film critic for the Chicago Reader. Recorded in 2007.

Director Michel Gondry is joined by Jonathan Rosenbaum, head film critic for the Chicago Reader, for an in-depth conversation about Gondry's incredible career — from music video director to Academy Award-winner.

Art and film come together easily in the vividly imaginative mind of Michel Gondry. His sets become sculptures in which his characters appear to live in the three-dimensional style of his photographs—melding art forms to accommodate the vast world of his dreams. After a prolific start directing innovative music videos, Michel Gondry made his first foray into feature films with the quixotic Human Nature (2001) and Eternal Sunshine of the Spotless Mind (2004), two collaborations with celebrated screenwriter Charlie Kaufman. With his organic and off-the-cuff work style, Gondry was a great fit with Kaufman, as he injected his own notion of chaos into Kaufman’s meticulously planned scenarios. Eschewing computer-generated effects for in-the-moment naturalism, Gondry often utilizes everyday materials to create his whimsical film worlds. The Science of Sleep (2006), his first project directing from a script he authored, typifies his playful, adventurous explorations of the psychology of memory and dreams. Influenced by Luis Buñuel and Jean Vigo, Gondry uses fantastical imagery to plumb our deepest feelings and the intersection between dreams and reality.

With a background steeped in music—his grandfather invented the Clavioline (one of the first synthesizers) and his father owned an instrument store—Gondry began his career making music videos for the band Oui Oui, for which he was drummer during his art school days in Paris. In 1993, he met singer Björk, and a long and ferociously creative relationship was born. He has gone on to direct videos for groups ranging from the White Stripes to Kanye West to the Rolling Stones. Always visually arresting, his work has a core of humanity that is often lacking in visual effects–driven work: the man has soul. “In the most twisted and complicated idea,” says Björk, “Michel is only looking for one thing: to extract a bit of magic and mystery from things.”