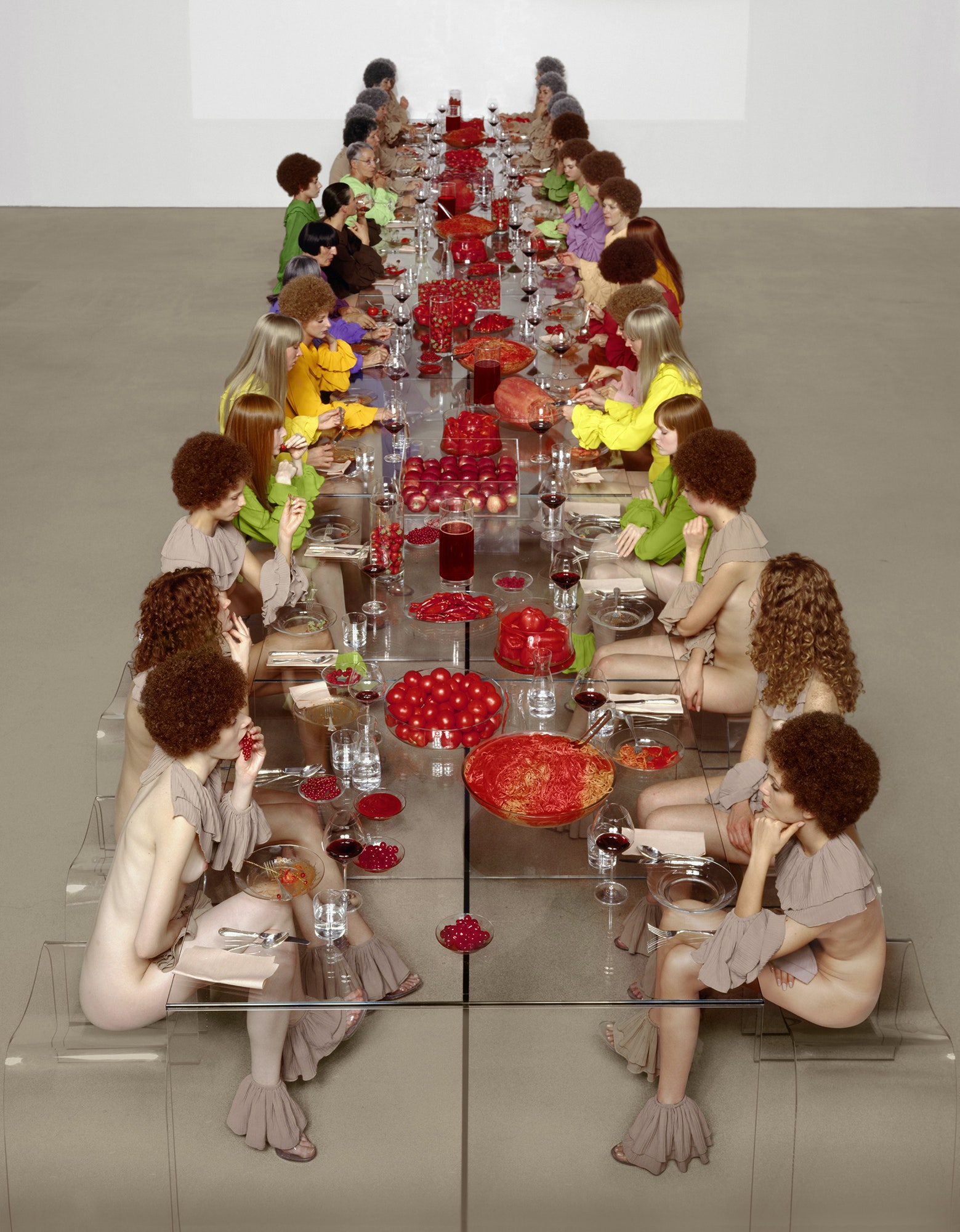 Can a sculpture dance? Can a painting come to life? Through works that bring together objects, movement, or the living body, The Paradox of Stillness explores the intersections between performance and visual art. The presentation features artworks by successive generations of artists who test the boundaries between stillness and motion, mortality and time.

Continually evolving, the exhibition showcases performances or movement-based pieces, which are highlighted here in a series of short videos. Due to this continuous activity, the experience of the show is never the same from day to day. We invite you to return to witness and engage with its evolution over time.

Francesco Arena uses sculpture and performance to uncover significant histories in the recent past. This work memorializes psychoanalyst Sigmund Freud (1856–1939). At times throughout the exhibition, the sculpture will be activated by a person born in 1939—the same year in which Freud died. When visitors approach the sculpture, the performer begins a conversation, revealing fragments of their life.

A poignant reflection on life and death, Corner of Discontent is destined to change over time: each year that passes increases the age of the performer, now 82 years old. Eventually, the work will no longer be activated and will exist only as a sculpture.

For this presentation, a live performer hosts the space via Zoom. You’re invited to join them in conversation!

A choreographer and visual artist, Simone Forti is best known for her early minimalist dances that combine everyday objects with simple, almost sculptural, gestures. Expanding on this practice, Forti began to use dance and sound to investigate the relationship between movement and language.

In Cloths, three performers crouch behind wooden frames fitted with layers of colored fabric. They begin to sing along with recorded tracks of their choosing, creating a cacophony of sounds with their overlapping voices. At the same time, as the performers gradually shift the cloths, a densely layered painting is set in motion.

Felix Gonzalez-Torres is best known for sculptures that feature everyday materials such as strings of lightbulbs, endless stacks of paper, groupings of wall clocks, or piles of hard candies. His works often invite the viewer to participate through various interactions. Ambiguous, subtle, and highly metaphoric, Gonzalez-Torres’s art is infused with social commentary born of the urgency of living in a time of AIDS.

“Untitled” (Go-Go Dancing Platform) is composed of a painted box, with a series of bare incandescent bulbs tracing the perimeter. For most of the time, the platform exists as an unused stage, waiting to be activated by a go-go dancer. For a few minutes each day, a performer listens to music on headphones and dances in silence on top of the platform. Without the dancer, the empty stage functions as a theater marquee, creating a heightened sense of anticipation for the performance to come.

Anthea Hamilton works across media, incorporating sculpture, installation, and performance into her practice. The site-specific environments she produces are live and conversational, combining objects and images, both found and made. The artist’s consideration of the location, cultural and political environments, and her personal circumstances at the time provide a framework for her research.

For this new commission, Hamilton created a work that begins with the common cabbage (Brassica oleracea), which provides the structure for both choreography and formal design. “One thing the cabbage may do is perform an act of self-serving extravagance. An act of survival triggered by a sudden shock to its system: the bolt,” says Hamilton, pointing to the plant’s natural process of bursting into flower or going to seed. “Newly transformed into something tough and bitter-tasting, it is no longer of any use to an eater; it survives.”

On a green-tiled set, somewhere between a bedroom and a cabbage patch, pairs of performers begin movements that reference 1970s New York performance art as well as sculptures from the Walker’s collection. Never straying far from the fractal patterns of cabbages, the piece concludes when they’re brought back to their senses by the use of specially designed perfumes, each based on their own biochemistry.

An artist and choreographer, Maria Hassabi explores the tension between stillness and movement, emphasizing the body as a sculptural presence in performances of extended duration. As Hassabi explains, “I often talk about the paradox of stillness in my performances, because stillness can’t really exist—we are breathing, and even if it’s imperceptible, it’s still a movement.”

STAGING: solo unfolds as a progression of highly formal choreographies. The work shifts between dance and sculpture, subject and object, live body and still image. The slow-paced movements are often nearly imperceptible, drawing us in and heightening our awareness of each subtle change over time.

Combining installation, film, living ecosystems, and performance, Pierre Huyghe often creates sensorial experiences that engage viewers in an encounter with a work of art. For this piece, a tuxedoed performer invites us to become part of the art by acknowledging our presence in the gallery with decorum and grace.

Anne Imhof’s provocative works give form to the alienation and detachment that defines aspects of contemporary life. Foregrounding symbols of death and decay, Imhof’s visual language echoes the memento mori (literally, “remember that you must die”)—a painting tradition that often features reminders of time’s passing, such as a melting candle or a human skull.

In this durational performance, lounging performers interact with a collection of commonplace objects, including burning bouquets of flowers and empty beer cans. Alternately isolated and intimate, the performers convey a sense of loss, longing, and the fragility of the everyday.

Standing side-by-side in a line designated by the artist, participants tell one another the time with each passing minute. The process continues down the row until it reaches the person at the end, who makes the announcement in a language of their choosing. Members of the public are invited to participate in the activation of this work.

Goshka Macuga
Death of Marxism, Women of All Lands Unite
2013

Tapestry plays a significant role in Goshka Macuga’s work, and she uses the woven fabrics to reinterpret significant moments in European history.

In this performative artwork, a large tapestry depicts the grave of Karl Marx, the German philosopher known as the “father of Communism.” Various voyeuristic images of women, taken by Czech photographer Miroslav Tichý, also populate the landscape. The tapestry also serves as the stage for two female performers who pose like paintings come to life. With this provocative juxtaposition, Macuga turns the passive objects of the photographer’s gaze into active participants in a history that excluded them.

The work’s title plays on the famous communist rallying cry engraved on Marx’s tombstone, “Workers of all lands unite.” Here, the artist has replaced the word “workers” with “women.” In this exchange, Macuga shifts the slogan from a communist call to end class struggle to a feminist one, calling for the end of sexist oppression.

Drawing on puppetry, theater, and dance, Paulina Olowska uses movement to explore the performative aspects of written language. Her newly commissioned performance is inspired by the work of Roland Topor, the French-Polish poet known for his absurdist writings and drawings.

Referencing Topor’s typographic design for an alphabet, dancers carry letter-shaped pillows and arrange their bodies into words to visualize his poems. This performance in the Minneapolis Sculpture Garden’s Cowles Pavilion coincides with the launch of the third installment of Olowska’s magazine Pavilionesque. In this richly illustrated issue, artists and writers use the poet’s works as a starting point to speak on the topic of the grotesque.

Michelangelo Pistoletto made his first “Venus of the Rags” in 1967, when he purchased a concrete replica of the classical statue from a garden store and placed it against a pile of discarded rags in his studio. While Venus is a symbol of ideal beauty in classical art, Pistoletto presented the Roman goddess as a ragpicker, challenging the canonical sculptural motif. In 1980 the artist created a new version of the work, which replaced the statue with a live performer. Here, a living model mimics the pose of the sculpture in a subtly changing tableau.

Rooted firmly in her training in philosophy, Cally Spooner’s work is generated through writing, unfolds as performance, then lands as film, sound, sculpture, drawings, or scores. As the artist describes, her pieces use “duration and rehearsal as acts of resistance to corporate, digital, and performative climates in which it is hard to tell the difference between what is alive and what is dead.”

In DEAD TIME (Maggie’s Solo) a dancer shifts across a spectrum of heightened activity and waiting. “Effectively an anatomy study for the 21st century,” says Spooner, the piece “examines a technical and temporal performance climate in which the human body becomes both vital and corpse-like. Equally, it asks how the same body may evade capture, circulation, and compression by recasting itself as a preparatory, durational reality.”

The solo is part of Spooner’s ongoing project DEAD TIME, which centers around a 63-page performance score of the same name. The artist has been incrementally translating this score into live performance, sound, scripts, and installations since 2018.  “DEAD TIME refuses future-orientated-outcomes and arrives in a pervading-present-tense, in which no major action or narrative development take place,” notes Spooner. “DEAD TIME is an event that is chrononormatively inactive and therefore holds the potential to restitute life.”

Franz Erhard Walther’s practice spans sculpture, conceptual art, and performance. In the 1980s Walther began making Wall Formations, a series of works constructed from wood and cloth. Hung on the wall, but three-dimensional in form, these hybrid works are part painting and part sculpture. Redefining both mediums, Walther places living bodies within the work, transforming the passive object into an active engagement.

Using a wide range of materials, Haegue Yang often creates multisensory experiences that incorporate sound, scent, and touch. For this sculptural trio, she was inspired by the designs of early avant-garde artists such as Sophie Taeuber-Arp and Oskar Schlemmer (also represented in this gallery). Constructed from everyday objects—office chair casters, brass bells, turbine vents, and artificial plants—these life-size marionettes subtly ring when moved through the space by performers.

Upcoming Performances
Walker Art Center
The following text field filters the results that follow as you type. Use Tab to access the results.
No results available