Screen Saviors: The Art or Skill of Combining Text and Pictures
Skip to main content

Screen Saviors: The Art or Skill of Combining Text and Pictures

Memes don’t circulate because they’re true,” Hua Hsu wrote in his 2016 New Yorker essay, “The Dank Memes that are ‘Disrupting’ Politics.” “They circulate because they’re funny. They’re about reappropriating the culture around us and short-circuiting meanings.” Last year, memes were googled more than “Jesus,” proving that humor and contemporary culture are more or less inseparable. We like memes because, generally speaking, they have the power to oversimplify things that we can all relate to, uniting us in weirdly comforting and effective ways (it’s been said that we all relate to memes more than we do to other human beings1). Designers like memes because they adhere to a particular and now, universal, visual language—one that most designers can appreciate and enjoy.

Screen Saviors, a graphic design Instagram meme account, is a humorous poke at the graphic design industry and the conversations that ensue between designers, clients, and the occasional passersby. And whereas Hsu believes that “at their best, memes bring power or celebrity or influence down to the level of the crowd,” Screen Saviors is an example of how memes can actually unite a broad-ranging industry; bringing all types of designers together to laugh and comment amongst themselves. The account is more than just an amusing, self-reflective experiment by its creator—an anonymous graphic designer who enjoys making fun of his or her own profession—it’s a raw and candid, yet carefully composed critique of the design industry, contemporary culture, and all the weird things that make designers tick. And it’s really funny.

Hey Aryn! Thanks so much for reaching out. Things are good.

I have a few questions for you.

Did you set out to create Screen Saviors or did it happen haphazardly?

Very haphazardly. I was just trying to make myself laugh. That’s still the main reason I do this.

Tell me about your logo.

I wanted the name to make fun of the idea that design can save the world, so I initially starting thinking of “design saves” or “design saviors” then that lead me to screen saviors. The Windows logo was just the first thing I thought of when I thought of a screen saver (I realize it’s not actually a screen saver), and then I just liked how it was in the clouds like it’s this thing to be worshipped. The cross might be a little much tbh, but uh, no sense in changing it now.

How would you describe the Screen Saviors community?

When I first started it was only other meme accounts, and I quickly became friends with them. It wasn’t until later that actual designers started following and paying attention. Now it’s a huge mix of people. Everyone’s very nice though, I’ve met a lot of cool people from it.

Why did you decide to remain anonymous?

I don’t want to be famous or known for making memes. I’m happy doing this for fun and doing my real work for real. The followers were a huge surprise to me.

Do you live in the US?

Yes..but really, that’s all I can say.

Do you work for a corporation? Small studio?

Who put you up to this? Are you working for the AIGA?

Ha! No, not working for the AIGA.

Do you think every profession has some way of critiquing itself, and memes are the best fit for critiquing design?

I think memes are a good fit for critiquing any profession. I guess it helps that memes also deal with type and image.

Why do you think people choose to communicate with each other through memes?

I mean, we’re in a really weird time. For me, memes essentially took off because people realized literally everyone checks Instagram, and they check it A LOT. So this shared experience started where you’re almost acknowledging that we’re all on here. It’s sort of like saying “Hey I see you, smash the like if you see me”. Then there’s the element of commenting on current events and pop culture. Again, it’s like saying “I know you saw this in the news because we all did, so here’s a comment on it.” They become these inside jokes that suddenly everyone is in on. I mean there’s more to it…this could be its own article.

Who is your dream follower?

Why is internet culture important?

Why is remix culture important?

Are you a graphic design optimist or pessimist?

I consistently go back forth. Almost daily. I’m a design optimist for sure.

Are designers full of shit?

No, I don’t think so! I poke fun every now and then, but I try not to critique designers so much as the industry as a whole.

What is the future of design?

I make memes, so probably asking the wrong person.

I’m guessing meme-making doesn’t pay the bills. How do you earn a living?

I see what you’re doing, very sneaky. I’m a designer just like everyone else.

Is competition amongst meme makers a thing?

What words would you use to describe this side hustle of yours to your Grandma?

My Grandma knows all about what I do! She dislikes Beigecardigan more than me.

What do you think about the Gucci meme campaign? Clever marketing tactic or careless corporate appropriation?

I’m not against it in the sense of corporate appropriation by any means. And I really like how they reached out to real meme artists. I will say I’m a little surprised how polished and pretty they look, though. I get what they’re going for, but I think there’s something to embracing the raw and candid quality memes have. But shouts to them for giving meme admins some exposure.

fuckjerry and I are not on good terms. I fuck with earlboykins though.

What is your favorite meme? 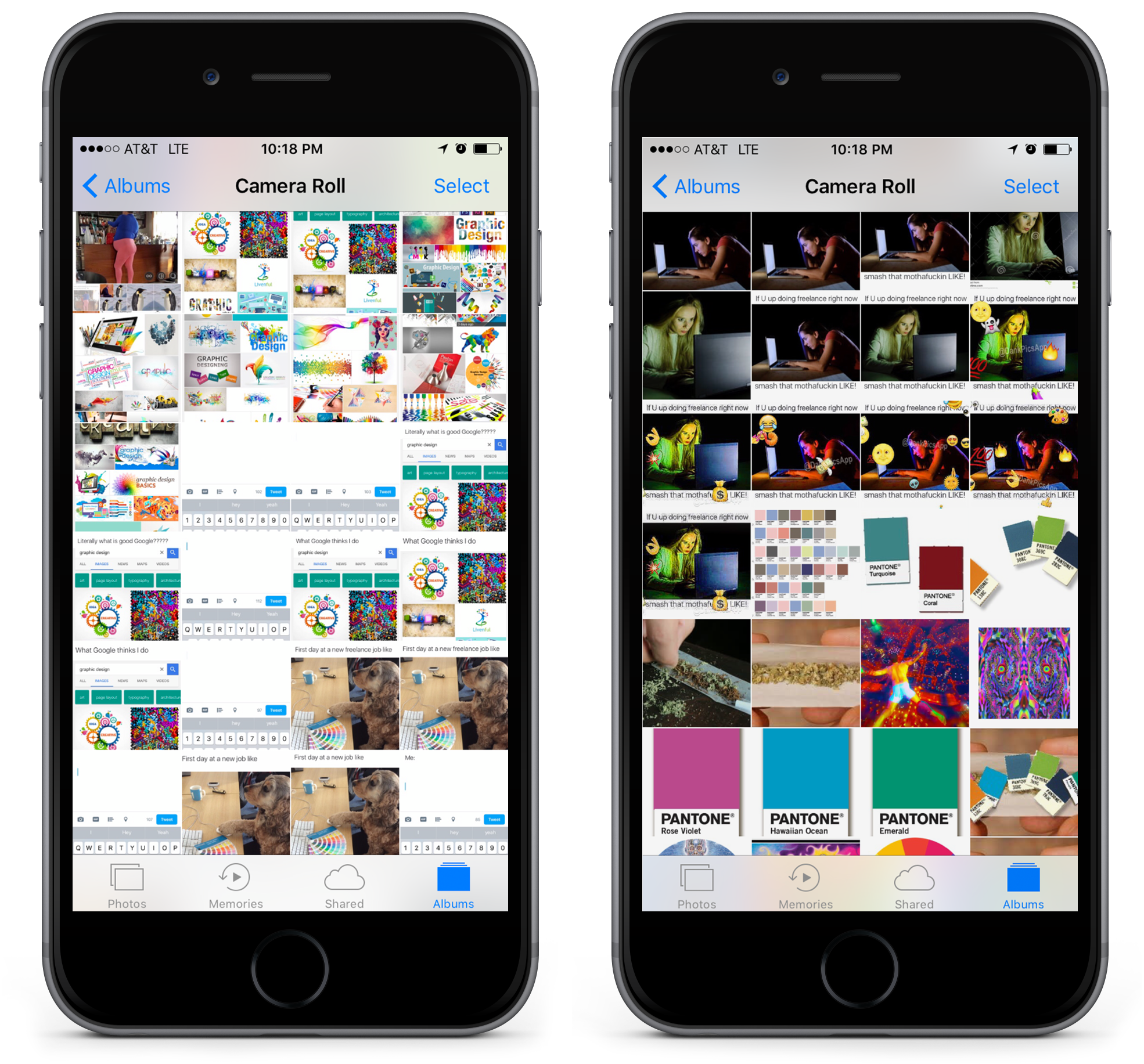 Does the word “bespoke” cause any sort of physical reaction for you? If so, what?

Do you own a fidget spinner?

No, surprisingly. I haven’t even tried one yet…I’m worried I’ll get addicted.

Rank your top 10 typefaces of all time.

Rank your top 10 design movements of all time.

Rank your top 10 emojis of all time.

How would you describe contemporary culture? 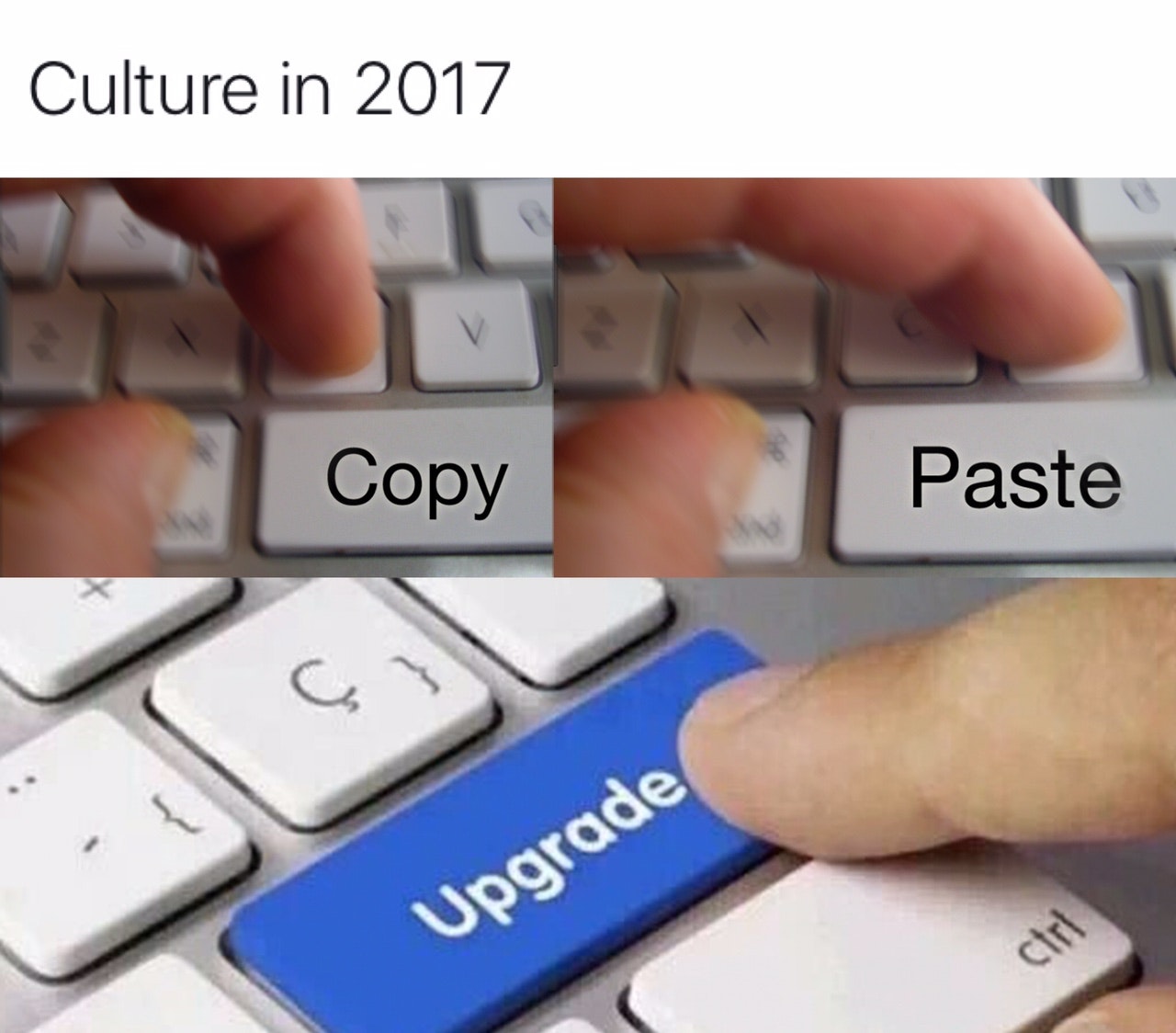 Can you make a meme for us?

I love how the Walker already made the original starter pack, so I took another go at it.

Ha. I guess you could argue that curating an exhibition is kind of a starter pack or a snapshot of a given time period or subject. The Graphic Design: Now in Production show did just that with designers who do more than just 2D graphic design. That, and the aesthetic of the book is already in the starter pack format with a collection of designer items a designer might be interested in.

Can you make another one? 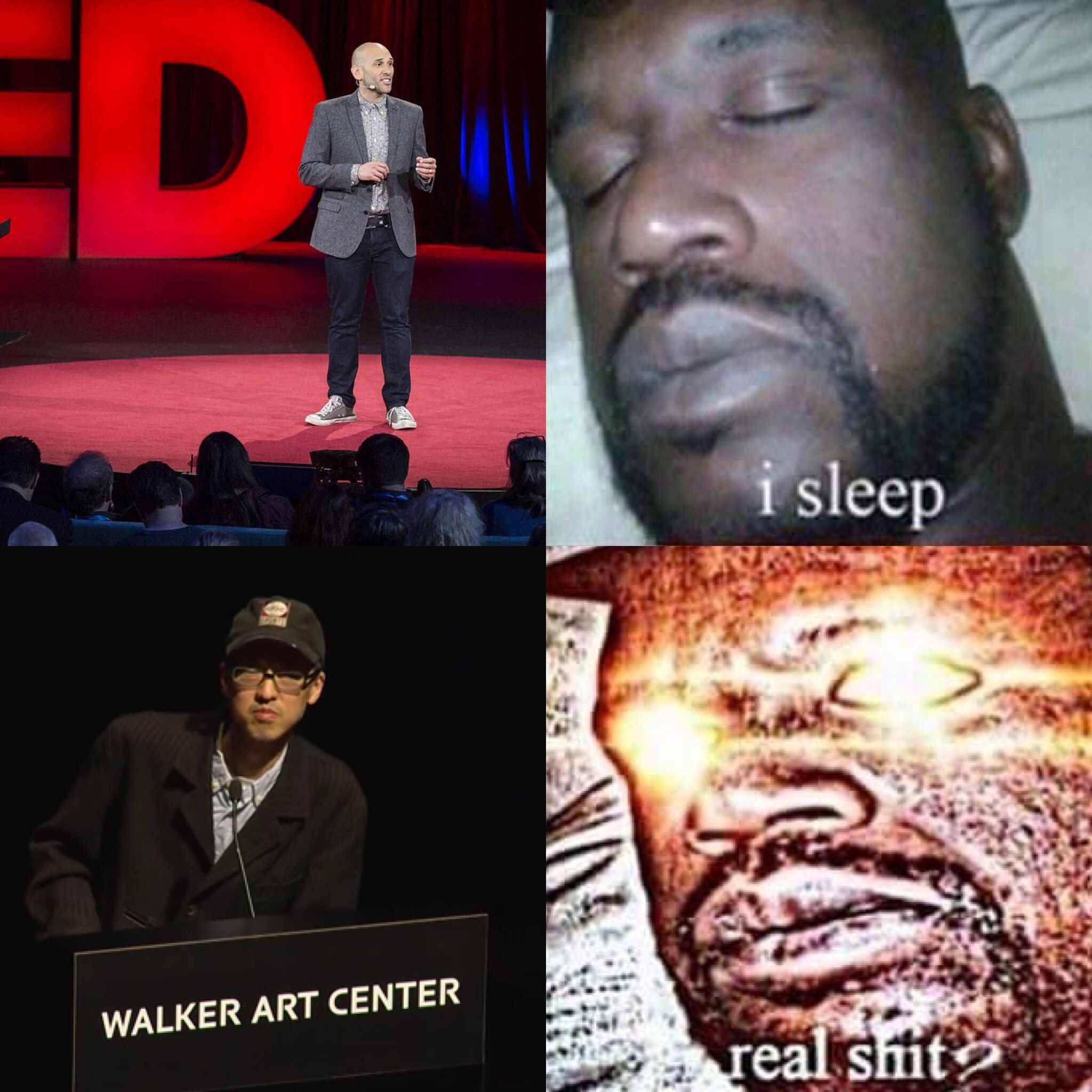 We don’t recognize the person behind the podium. Is that you?

Can you walk us through your process? Do you see something online that inspires you and then you design a meme in response to that, or do they originate in your head first, and then you seek out the appropriate content?

It really varies. A lot of them, especially the ones about clients, come from real experiences. Honestly, most of them are just me making fun of myself. I’m very aware that I’m a stereotype in a lot of ways. Sometimes, I see a meme format (ex: Salt Guy) and try to think of a design angle for it. Other times, I have an idea and try to think of the best meme format to express it properly (ex: the TED Talks Walker meme above). For process, if you zoom into those phone screenshots, you can get a real sense of how they evolve. You’ll see I get very fussy about getting the wording right for each. It’s extremely dumb, ha. 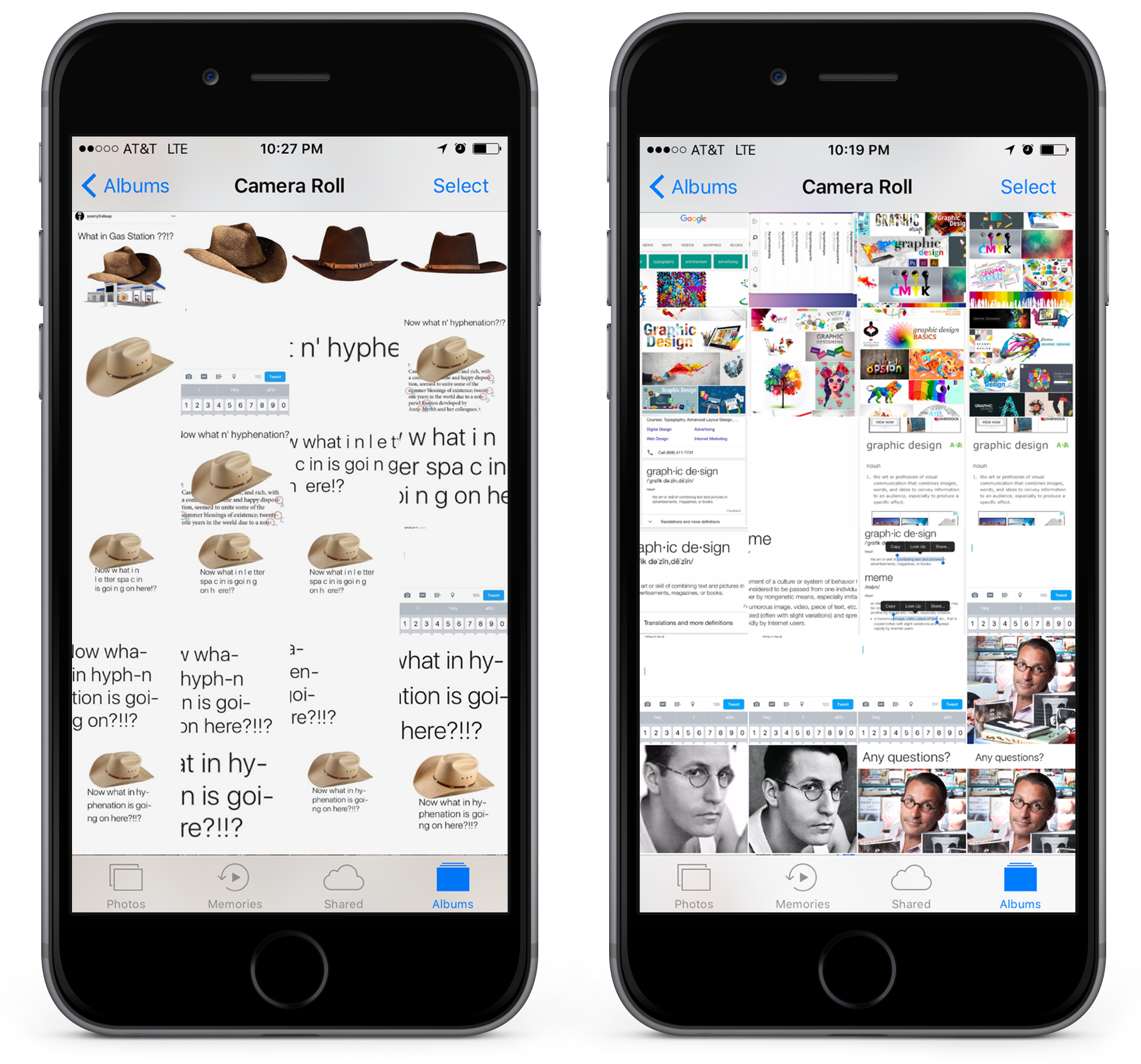 Which memes are based on real-life experiences?

This one is based on a true story when I went to my crush’s apartment and she became a double crush.</p >

The one below is essentially a self-portrait, which hits really close to home. Funny to see how many people relate, especially to that break-up text.

The one above was a real Tinder conversation where someone asked me that and I honestly didn’t know how to respond which…I think I never replied, actually. Sorry!

Are you available for freelance?

Ok, great. Can you send us your personal portfolio site?

What’s the future of Screen Saviors—how long do you plan to keep this going? Do you think you’ll ever get tired of making memes?

No plans for the future right now. I’ll keep making them for as long as they keep making me laugh.

Have any companies approached you to create custom Instagram memes?

Yeah, a few big ones have actually. Not sure if I can talk about it yet, but there might be some Instagram takeovers soon.

Behind the jokes, there is something kind of bleak at the core of what you do. Are you ok? Need to talk about it?

This is how I talk about it. Thank you for listening everyone; means a lot.

Any parting words for Gradient readers?

Does anyone have Atlas Grotesk?