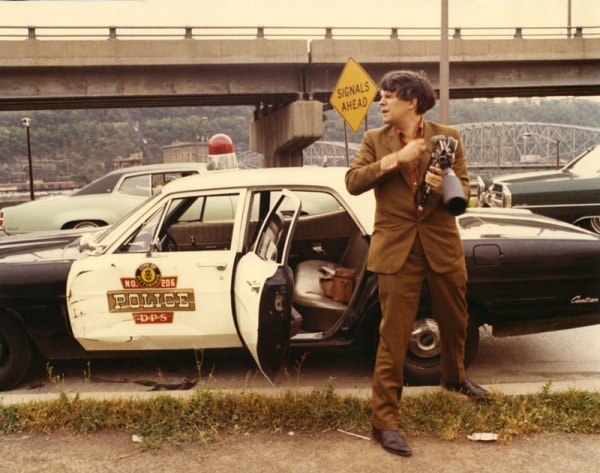 Stan Brakhage is an influential figure in the world of experimental cinema. A director who has crafted a body of work showcasing his extreme versatility, Brakhage often calls upon old-fashioned techniques and plays with the absence of sound and color. His works range from three-minute shorts to four-and-a-half-hour filmic experiences. Brakhage’s films have been noted to be extremely personal and autobiographical, from Anticipation of the Night (1958) to Dog Star Man (1961–64) and Mothlight (1963). In conjunction with the Dialogue series, the Walker Art Center presents the world premiere of The Earth Song of the Cricket (1999) and U.S. premiere of Birds of Paradise (1999). Brakhage is joined by Bruce Jenkins for an evening of retrospection on the filmmaker’s astounding output. Jenkins is currently the dean of undergraduate studies at the School of the Art Institute of Chicago and was curator of the Walker’s film/video department from 1984 to 1999. Recorded in 1999.

Director Stan Brakhage and Bruce Jenkins join for an evening of retrospection on the filmmaker’s astounding output of work. Jenkins is currently the Dean of Undergraduate Studies at the School of the Art Institute of Chicago and was curator of the Walker’s Film/Video department from 1984-1999.

Stan Brakhage emerged mid-century and almost single-handedly shifted the experimental cinema away from its reliance on literature and surrealist psychodrama and toward a more purely personal, visceral, and visionary form. This he achieved in a series of extraordinary films he made in the late 1950s and early 1960s that used aspects of his daily life to focus on existential anxiety, the dynamics of love and sexuality, and the “fallenness” of the world. What emerged from his series of autobiographical portraits—from the existential Anticipation of the Night (1958) to the mythopoetic Dog Star Man (1961-1964) and abstract studies such as the camera-less Mothlight (1963)—was an understanding of the image no longer simply as a conveyer of representational content and narrative meaning, but rather as the record of an intensive act of seeing. The films, with their gestural camera movements and hand-crafted, manipulated surfaces, became (to invoke the title of Brakhage’s major treatise on film) “metaphors on vision.”

Despite the rather private nature of many of his concerns—ironic for an artist working in such an ostensibly public medium—and despite his self imposed exile in the mountains of Colorado, where he and his wife and artistic collaborator, Jane, raised a family while creating their impressive body of work (jointly signed as “Brakhage” by the early 1960s), Brakhage exerted an enormous influence on subsequent generations of filmmakers as he injected new content and explored new formal approaches to the medium. In legitimizing the distinctly nonprofessional production site of amateur filmmaking—the home (“I studied home movies as diligently as I studied the aesthetics of Sergei Eisenstein…”)—he also prefigured much of the discourse of avant-garde film practice in the following decade, from the formal strategies of the personal cinema to the emergence of the counter-cultural form of the “underground movie.”

Brakhage’s figure has cast a large shadow across the independent and experimental cinemas of the past four decades and represents an exemplary practice that continues to this day to develop and refine itself. While new forms of moving-image practice proliferate among visual artist, digital practitioners, and filmmakers, Stan Brakhage continues to make his highly personal films. Resonating with an undiminished visual intensity and a potent engagement with the fundamental questions of life, each new work bears witness to Brakhage’s prolific achievements and his continuing role as one of the modern masters of the medium.

Bruce Jenkins is the Dean of Undergraduate Studies at the School of the Art Institute of Chicago. He was previously the curator of the Walker Art Center’s Film/Video department and the Harvard Film Archive.