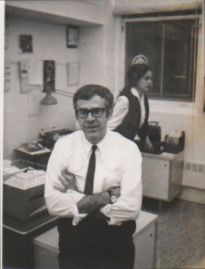 The offices in the original Walker Art Center were on the south side of the building. A hallway ran down the middle. Curators Jan van der Mark, Dean Swanson and Sue Foley had offices, as did Peter Seitz, graphic designer, and Sue Weil, Coordinator of Performing Arts. The secretaries, interns and I, the Public Relations Coordinator, had cubicles there. At the end of the hall, around the corner, was director Martin Friedman’s office.

Every now and then TB Walker’s son, Archie Walker Sr. (who was in his eighties), would pay a visit. As he walked down the hall to see Martin, he would put a polished stone on everyone’s desk. He loved to polish stones and these were little keepsakes. He was a kind and gentle man, rather shy as I recall. I don’t remember him saying anything. The stones spoke for him.