The Story of an Irascible 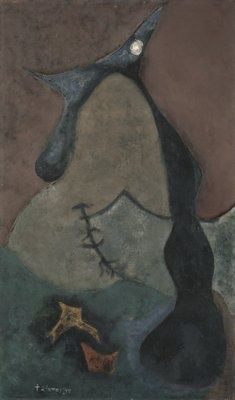 Theodoros Stamos was one of the “The Irascibles” pictured in Nina Leen’s historic photo in Life magazine in early 1951 . Appearing with such luminaries as Jackson Pollock, Willem de Kooning, Robert Motherwell, Mark Rothko and Barnett Newman, Stamos sits at the lower left, glowering as much as any of the others. These were the famous gesture and color field painters of Abstract Expressionism, “irascible” due to their denunciation of the conservatism of the Metropolitan Museum of Art show American Painting Today, 1950. Harvard Arneson, the Walker Art Center’s second director and author of the definitive history of 20th-century art, called their work “the most powerful, original movement in the history of American Art.”

The Walker featured Stamos in a retrospective in 1960 and he flew in from New York. I was charged with shepherding him around town. We were both Greek, and we hit it off immediately. Stamos constantly teased me that my trench coat was too clean (trench coats were men’s style uniform in those days). My wife Peggy and I visited Stamos in his studio shortly after and I found that, like any Greek, he was also a peddler: he wanted to sell me a painting. I admired one of them. “How much do you think that is worth?” he asked me and I said, “Fifteen hundred dollars.” I nailed it, just pure luck, and he was truly impressed. But I didn’t buy it, not on my museum salary.

Stamos came to a bad end, however. He and Mark Rothko were very close friends and Rothko named Stamos his executor. After Rothko’s death, Stamos began selling his paintings at bargain basement prices to galleries and dealers for a kickback. Rothko’s daughter sued Stamos and won her case. He lost everything including his reputation and moved to Greece where he died a broken man.

The only woman in the Irascibles photo, Hedda Sterne, happened by the day the photo was taken. She was invited to join the men and stood on a table in back. She never received the acclaim of her fellow painters but she had the last laugh by outliving them all. She was 100 years old when she died in 2011.