Anthony Braxton at the Walker
Skip to main content 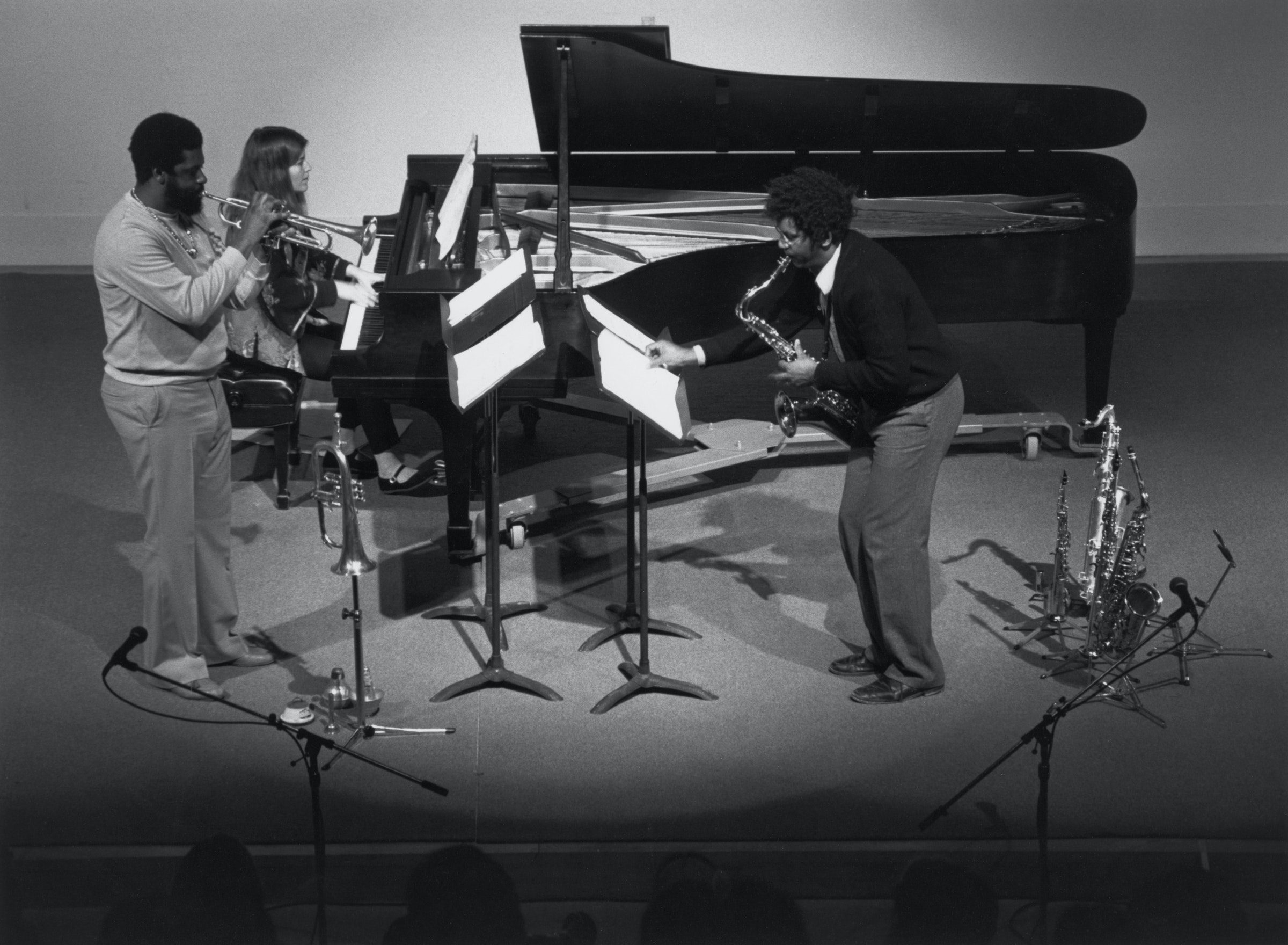 Danielle A. Jackson, “Anthony Braxton at the Walker,” in Creative Black Music at the Walker: Selections from the Archives, ed. Danielle A. Jackson and Simone Austin, Vol. IV of the Living Collections Catalogue (Minneapolis: Walker Art Center, 2020). https://walkerart.org/collections/publications/jazz/anthony-braxton-at-the-walker

I’m talking about what sound logic really is and what is set into motion when people really hear; the phenomenon of unifying sound. To have that experience involves many different levels of logic and of attraction. John Cage likes to talk of “let a sound be a sound,” etc., but to study the meta-reality dynamics of creativity as it’s viewed in world culture terms is to understand that music is not just sound. For those who are able to enter into abstract music, that phenomenon involves unifying what is being transmitted; and to enter the upper partials of music is to gain insight into the wonder of music, the wonder of existence. Really to enter the world of sound is to understand what a given function affirms in terms of primary force—I’ll say it like that. The world of abstract consciousness involves those areas of unity—mental or conceptual—that are the last partial before entering another level of consciousness.Graham Lock, Forces in Motion: Anthony Braxton and the Meta-Reality of Creative Music (New York: Dover, 2018), 155. According to Lock, a compositional methodology found within the work is what Braxton describes as “static sound space,” which means that there is no forward, linear time movement and the music resembles a necklace of caught moments, a point of coming into being not dissimilar to the timelessness that results from meditation. As Lock mentions, “You have to learn the discipline of attunement, of finding how to listen, how to be in that moment and that time; the practice of humility.” This is how Braxton described his Composition 76 (for Trio) (1977). See also Lock, Forces in Motion, 6. —Anthony Braxton

In 1988 scholar Graham Lock began a series of conversations with multi-instrumentalist Anthony Braxton (US, b. 1945), a respected improviser, conductor, composer, and interpreter known in the free jazz world and beyond. In one interview, Braxton valiantly declared, “Sun Ra is not a joke!” in response to Lock’s question, “How do you feel about Sun Ra’s mystical side?”Lock, Forces in Motion, 154. For Braxton, a figure as complex and profound as Sun Ra, understood some serious things: the world of abstract consciousness and the mystical dynamics of music. Discovering Sun Ra’s philosophies would catapult Braxton to the visionary—that is, his attempts to uncover information and to unify and transmit that information through music to a wider public who might or might not yet be aware of its existence.

The integration of abstraction and transmission makes any involvement with the world of sound a deep negotiation with spirituality as well as physical and mental divisions. Sound becomes a tool. Music becomes a vessel. Known for his interest in extreme registers, free improvisation, notated music, and extended compositions, Braxton has made recordings of solo saxophones, notated pieces for string quartet and tuba ensemble, and created free improvisation with company groups, avant-garde big-band jazz, and duos with musicians as diverse as Muhal Richard Abrams, George Lewis, Max Roach, and Richard Teitelbaum.

A 1980 concert at the Walker with Teitelbaum deftly laid bare Braxton’s profound interest in the qualities of abstraction paired with an intensive exploration of the outer boundaries of sound improvisation. His return to the Walker later that year for the New Music America Festival, and again in 1983 with his trio (Marilyn Crispell on piano, Baikida Carroll on trumpet) for an AACM celebration, clearly distinguished Braxton as a major force in new composition.

Braxton’s overall philosophical view of music separates it into three categories—restructuralism, stylism, and traditionalism—what the artist calls the “tri-vibrational dynamics” that govern his body of work.Restructuralism refers to the natural change cycles within a continuum (with regard to music, it’s most related to innovation and evolution); stylism is the process of taking information, then using it (re-creation); and traditionalism involves having a better understanding of what has come before and the use of said information (a deferential quality). See Lock, Forces in Motion, 165. (The number three in Pythagorean numerology is also the number of knowledge—music, geometry, and astronomy.) For Braxton, balancing these three forces is a recipe for a fruitful culture and dynamic music.

The route of Braxton’s life and his ongoing refusal to heed boundaries has made him one of the most controversial figures in creative music. A philosophy seeped in an African mystical lineage (which, as Braxton maintains, reaches back to Egypt), along with European and Asian musical influences that include Arnold Schoenberg, Ali Akbar Khan, and Ravi Shankar, has led to Braxton’s work being labeled “not as black” as some of his contemporaries, or not as stringently “jazz”—a characterization that began during his years as a member of the Chicago-based Association for the Advancement of Creative Musicians (AACM).

In the early 1960s Braxton witnessed musicians Roscoe Mitchell and Joseph Jarman starting to explore multi-instrumental possibilities—for example, by incorporating bells—and he began to integrate into his own work what he called “sound tools,” such as hammers, electric saws, and other nontraditional sound objects, to create an arsenal of noise. Braxton might play a solo clarinet or a soprano saxophone for one concert, then produce electronic music with Wadada Leo Smith using audiotape (as a kind of DIY synthesizer) or conduct a chamber orchestra at another concert.

Braxton left the AACM for a stint in Paris in 1969, where he formed the group Creative Construction Company with violinist Leroy Jenkins and trumpeter Wadada Leo Smith. Braxton returned to the United States the following year, and in 1974 signed a recording contract with the major label Arista. For five to six years he would feed the label the quartet music they expected and weave the other, more experimental projects in “under the rug,” as he put it, such as several duos with Teitelbaum and Piece for Two Pianos (1980).Lock, Forces in Motion, 131. Using the record label as a platform to investigate many different facets of his music, Braxton was able to document a cross section of his work, exposing the depth of his creativity. Ultimately, the Arista years would come to an end because of Composition 82 (1978), a 303-page score for four orchestras.Prior to this, Braxton was able to push his experimental music forward with the support of Steve Backer and Michael Cuscuna, the Arista label’s executive producer and producer, respectively. Apparently, endeavors such as a work for four orchestras or a piece involving one hundred tubas were becoming too costly, too grand, and too abstract for a mainstream label. But Braxton’s enduring contribution to creative music has been to not only open up new rhythmic elements, but also to feed the consciousness of human beings through the world of sound.