Art Ensemble of Chicago at the Walker
Skip to main content 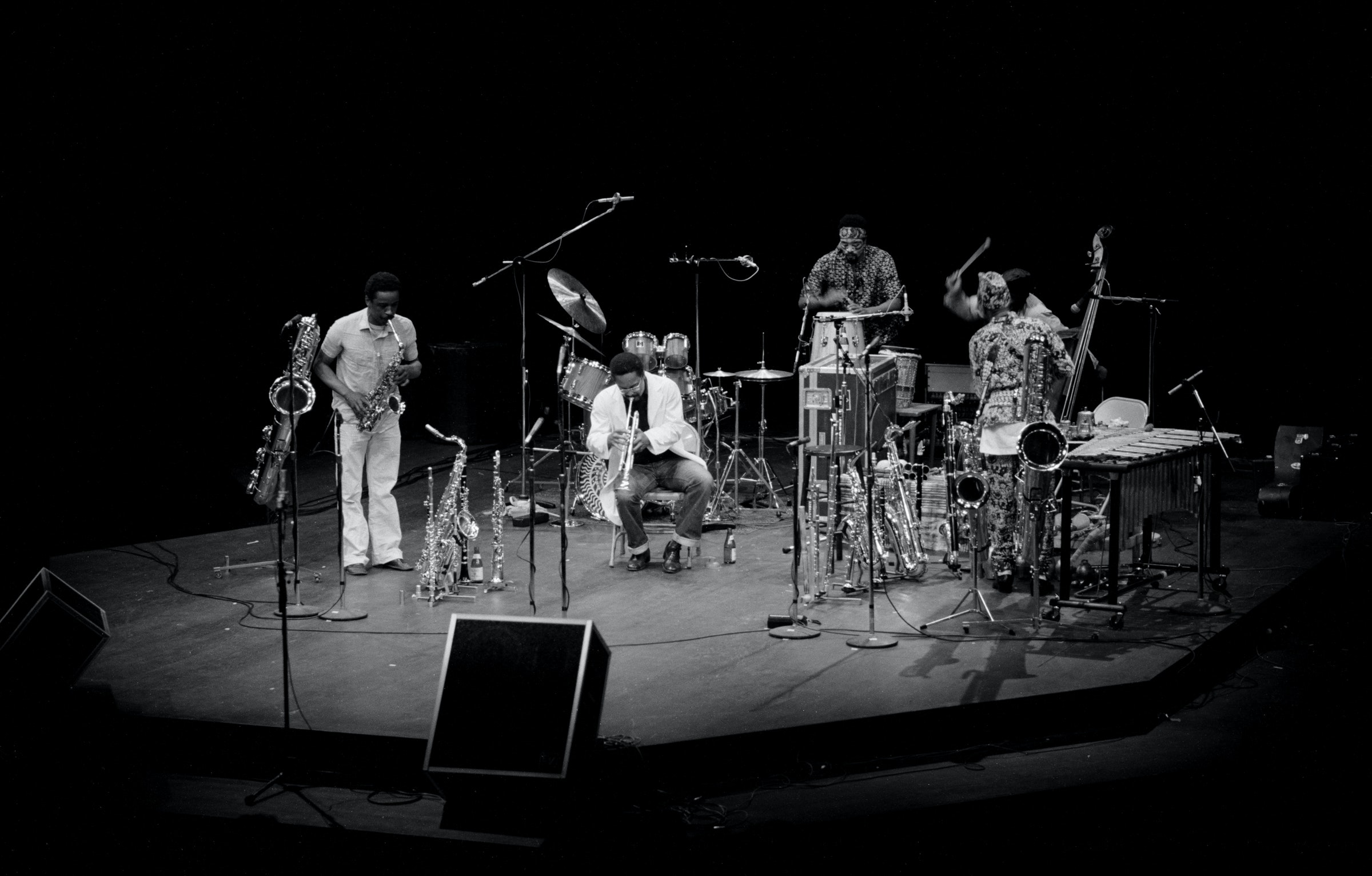 Danielle A. Jackson and Simone Austin, “Art Ensemble of Chicago at the Walker,” in Creative Black Music at the Walker: Selections from the Archives, ed. ed. Danielle A. Jackson and Simone Austin, Vol. IV of the Living Collections Catalogue (Minneapolis: Walker Art Center, 2020). https://walkerart.org/collections/publications/jazz/art-ensemble-of-chicago-at-the-walker

The Art Ensemble of Chicago (US, founded 1965) is an outgrowth of the Association for the Advancement of Creative Musicians (AACM), an ambitious Chicago-based collective that helped redefine jazz and improvisation.The Art Ensemble of Chicago played an important role in bringing the AACM to the attention of an international public. Both groups were formed out of a desire to create music outside of the purview of a white-dominated, segregated jazz industry that limited and at times excluded African American musicians from venues in Chicago. Initially formed as a quintet, the original members—Lester Bowie, Joseph Jarman, Malachi Favors Maghostut, Roscoe Mitchell, and Famoudou Don Moye—played together in various configurations from the mid-1960s.

The group’s early roots were in AACM founder Muhal Richard Abrams’s Experimental Band, a testing ground for area African American musician-composers, including saxophonists Roscoe Mitchell and Joseph Jarman and bassist Malachi Favors Maghostut. All of the members of the avant-garde jazz quintet were composers known for their multi-instrumental skills. In fact, the Art Ensemble and AACM improvisers at large would use every possible instrument at their disposal to explore the textures of sound beyond standard woodwinds, trumpets, bass, and drums: instruments as “little” as homemade metal triangles or as big and unorthodox as dump trucks were all fair game for sonic experimentation.In the late 1970s multi-instrumentalist Anthony Braxton developed an unperformed composition that used a cell-structure notation for dump truck (a sound tool). He explains that the truck would dump a pile of coal, and the score would be for four shovelers—each shovel would have an electronic modulation on it. See Graham Lock, Forces in Motion: Anthony Braxton and the Meta-reality of Creative Music (New York: Dover, 2018), 50. Imagine percussionist Famoudou Don Moye onstage with hundreds of drums and percussion surrounding him, or the little-instrument kings Roscoe Mitchell and Joseph Jarman engaging in a loose choreography igniting the entire saxophone, flute, and clarinet families. The concept of multi-instrumentalism was a hallmark of many AACM improvisers in addition to the members of Art Ensemble, including Wadada Leo Smith, Henry Threadgill, Douglas Ewart, and Anthony Braxton as well as all five primary members of the Art Ensemble of Chicago, particularly Roscoe Mitchell, and Joseph Jarman, all of whom cultivated multiple voices on a wide variety of instruments.

The Ensemble’s slogan “Great Black Music,” along with its corollary “Ancient to the Future,” were adopted as mantras of sorts by both musicians and critics (particularly in Chicago) a way of consulting a kind of Afro-diasporic canon that intensifies and aligns with the AACM’s philosophy.Lewis, A Power Stronger Than Itself, 257. Joseph Jarman speaking in reference to Art Ensemble of Chicago noted:

We were representing history, from the Ancient to the Future.... Malachi always represents the oldest entity.... He would look like an African/Egyptian shaman.... Moye was really in the midst of the African tradition ... not a single African tradition, but a total African tradition.... I was Eastern-oriented. These three were the pantheistic element of Africa and Asia. Roscoe represented a mainstream sort of shaman; the Urban Delivery Man.... Lester was always the investigator, wearing cook clothes, which is healing, creating energy and food.Lewis, A Power Stronger Than Itself, 448.

Seeking to not only transmit material and renew the language of art but also educate and inform themselves and their audiences, Art Ensemble blurs the distinction between art, life, and music. They incorporate theatrical elements—costumes, African textiles, face paint, dance, poetic dialogue—sewing together music and cultural signifiers from Africa, the African American tradition, and Europe like strips of kente cloth to invoke spiritual images and values. Many attribute their use of total theater to the influence of Sun Ra, but the influences range far and wide, and many visual artists and collectives, including David Hammons, Senga Nengudi, and Studio Z, have found inspiration in the theatricality of the ensemble.Danielle A. Jackson, unpublished interview with Senga Nengudi, July 7, 2017. Nengudi mentioned that Sun Ra’s Arkestra and Art Ensemble of Chicago performed at David Hammons’s Los Angeles studio on Slauson Avenue.

The Art Ensemble of Chicago performed as part of the Walker’s 1980 New Music America Festival, a multiday presentation of new and experimental music hosted at venues across the Twin Cities. The event was well received by critics, as detailed here in excerpts from critic Michael Anthony’s review in the Star Tribune: “If one of the hallmarks of the music presented in this series of the past week was the interchange of idioms and art forms, the lineup for the final concert was an apt one.” The group’s performance was further described as having “an eclecticism far wider and more diverse than any jazz-fusion aggregation could make claim to.” The ensemble’s hour-long set “began quietly with mysterious percussion tinklings from Famoudou Don Moye and tentative, fragmented phrases from trumpeter Lester Bowie” and “ended with a raucous, up tempo number in the manner of traditional New Orleans jazz.” In between, the concert had “an organic ebb and flow of differing moods and styles,” along with “a fair amount of high-spirited wit.”

The ensemble returned for a second Walker-organized engagement in 1980, this time at Orchestra Hall in Minneapolis. Individual members also later performed at the Walker, either as solo artists or as part of other groups, in subsequent years (Lester Bowie in 1981 and 1999; Joseph Jarman in 1999; and Roscoe Mitchell in 1987, 2008, 2015, and 2018).

The Art Ensemble of Chicago released nearly fifty separate recordings on a range of labels, including Delmark, Freedom, Atlantic, DIW, Nessa, and Pi. “A true collective,” wrote critic Todd S. Jenkins, “the Art Ensemble gave ample room to the playing and composing abilities of each member while retaining a unique, instantly identifiable sound that heavily influenced what followed in their wake.”Todd S. Jenkins, “Afro Avant-garde: The essential Art Ensemble of Chicago in 10 records,” Vinyl Factory Magazine (August 18, 2015), https://thevinylfactory.com/features/art-ensemble-of-chicago-ten-essential-albums/. The group’s two surviving members, Mitchell and Moye, continue to tour to this day with a range of guest musicians.

Text by Danielle A. Jackson and Simone Austin