Betty Carter at the Walker
Skip to main content 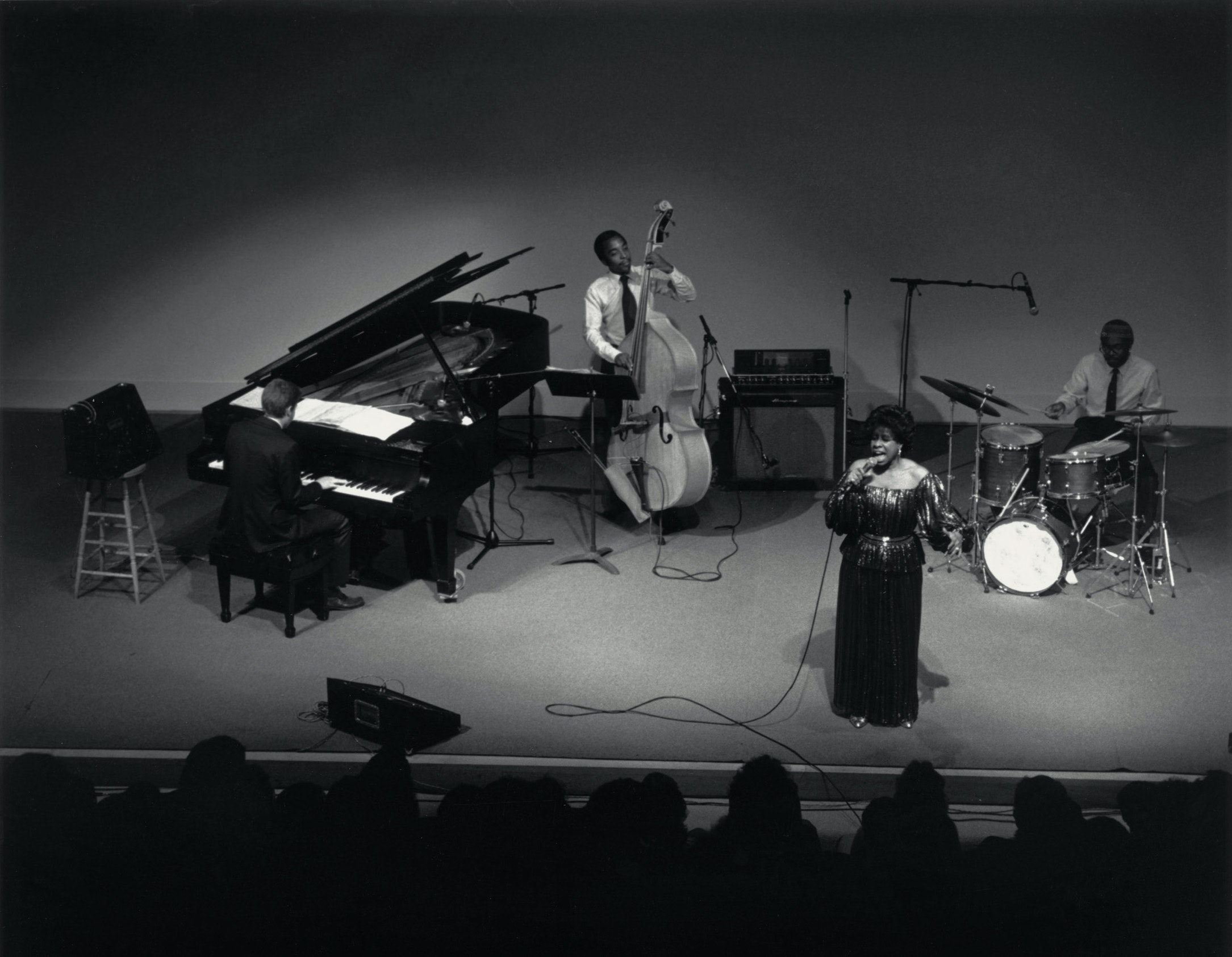 Known for her complex and imaginative vocal improvisations, Betty Carter (born Lillie Mae Jones; US, 1929–1998) was a jazz vocal pioneer. Her career was wide ranging—spanning the genres of bebop, post-bebop, and avant-garde jazz—and her influence profound. Born in Flint, Michigan, Carter studied piano at the Detroit Conservatory of Music and sang as a teenager in Detroit jazz clubs. She found early inspiration in the musical styles of Louis Armstrong, Billie Holiday, and Coleman Hawkins, but was most drawn to the innovators of bebop, especially the music of Charlie Parker. Through the mid-1940s, Carter made her way in the industry, landing a stint in 1948 with big band musician Lionel Hampton that lasted several years. During her time with Hampton, Carter’s preference for bebop was so well known—and her affinity for improvisation so strong—that Hampton jokingly referred to her as “Betty Bebop,” a name she would adopt momentarily before settling on the stage name Betty Carter.Brian Zimmerman, “Song of the Day: Betty Carter – ‘Open the Door,’” Jazziz Magazine, May 16, 2019, https://www.jazziz.com/betty-carter-open-the-door/.

Carter’s real rise in the jazz world began the 1950s, when she performed with such figures as Miles Davis, Dizzy Gillespie, Thelonious Monk, and Charlie Parker, in storied venues including Harlem’s Apollo Theater, the Village Vanguard in New York, and Blues Alley in Washington, DC. Jazz critics found her voice to be on par with Sarah Vaughan and Billie Holiday; so much so that in the 1970s, when Vaughan won DownBeat Magazine’s critics’ poll for Best Female Singer for four consecutive years (1975 to 1979), it was Carter who came in second in two of those years, gracing the cover of the May 3, 1979, issue of the magazine.Charles Carmon, ed., “Betty Carter: Her Unusual Bop-Based Style Is Like No Other Vocalist’s Anywhere,” DownBeat Magazine, May 3, 1979.

Carter toured with pianist, composer, and bandleader Ray Charles in the early 1960s, releasing the legendary collaborative album Ray Charles and Betty Carter in 1961. After working with Charles and touring to Japan with Sonny Rollins,Peter Watrous, “Betty Carter, Innovative Jazz Vocalist, Is Dead at 69,” New York Times, September 28, 1998, https://www.nytimes.com/1998/09/28/arts/betty-carter-innovative-jazz-vocalist-is-dead-at-69.html. Carter put her career on hold for several years to get married and raise her two young sons, returning to the studio briefly to record her 1963 album Round Midnight.Steve Huey, “Betty Carter Biography,” in AllMusic.com, https://www.allmusic.com/artist/betty-carter-mn0000048908/biography. During this time, she was also becoming increasingly dissatisfied with Atlantic Records’ oversight of her creative process. The label, for example, refused to let her work with composer and multi-instrumentalist Oliver Nelson, considered one of the best composers and arrangers of the era.William R. Bauer, Open the Door: The Life and Music of Betty Carter (Ann Arbor: University of Michigan, 2002), 90. No longer willing to compromise her music for the demands of a record company, and determined to forge a path that was hers alone, Carter started her own label—Bet-Car Productions—in 1969, on which she released the eponymous album Betty Carter in 1970.The album was later reissued by Verve as Betty Carter at the Village Vanguard. In an industry dominated by men, she was steadfast in her commitment to the integrity of the genre and to her insistence on excellence, often hiring male sidemen, and mentoring them on the rigors of jazz at the professional level.William R. Bauer, “The Audience with Betty Carter—Betty Carter” (1980), National Recording Preservation Board Documents, 2012, https://www.loc.gov/static/programs/national-recording-preservation-board/documents/BettyCarter.pdf.

Concerned about carrying the jazz tradition into the next generation, Carter at times was at odds with what she saw as the “trend” of free jazz. In its February 1988 issue, Ebony magazine ran the article “Are Blacks Giving Away Jazz?” by Marylin Marshall, which examined the trajectory of jazz and its relationship to the black community. When asked about her take on free jazz, Carter noted, “Some of the music turned off Black listeners, because it had no beat or pulse.”Marylin Marshall, “Are Blacks Giving Away Jazz?,” Ebony Magazine, February 1988, 98.

Carter spent much of the 1970s traveling and performing across the country, culminating in appearances at Carnegie Hall as part of the Newport Jazz Festival in 1977 and 1978. Founded in 1954 in Newport, Rhode Island, the festival showcased an annual pantheon of talent and set the bar for all major jazz festivals to follow. On May 18, 1983, Carter appeared at the Walker Art Center as part of a broad tour of the United States and Europe. It was her second engagement in Minnesota (her first had been in 1980 at the University of Minnesota’s Northrop Auditorium in Minneapolis), and her first time at the Walker, a venue that actively supported the Twin Cities’ thriving jazz and improvisational musical community. This time Carter performed with her trio, which included Lewis Nash (drums), David Penn (bass), and Benny Green (piano). In later years, her trio would become an informal school for rising jazz musicians such as Winard Harper (drums), Javon Jackson (saxophone), and Xavier Davis (piano).

From all accounts, the sold-out 1983 performance at the Walker was a magical evening. For more than two hours, Carter performed originals and renditions of such numbers as Harry M. Woods’s “What a Little Moonlight Can Do,” Arthur Johnson and Sam Coslow’s “Cocktails for Two,” and Carlos Garnett’s “Caribbean Sun.” Describing the concert, Connee Chivers, a noted musician, vocalist, and reporter for Minneapolis’s Insight News, wrote, “The trio itself was full of musical excitement and could stand alone as a performing group.”Connee Chivers, “Madame BeBop Betty Carter,” Insight News, Minneapolis, May 26, 1983.

The images, recordings, and archival materials that follow highlight the talent and delight of Carter’s performance, a moment at the height of a remarkable career when one could witness her unparalleled scatting, vocal improvisations, and gifts as a bandleader.

Betty Carter and her Trio

During the two-and-half-hour concert, the group performed a number of songs from Carter’s 1982 album Whatever Happened to Love?, including “What a Little Moonlight Can Do,” “Cocktails For Two,” “Goodbye,” and “I Cry Alone.”

Betty Carter and her Trio