Cecil Taylor at the Walker
Skip to main content 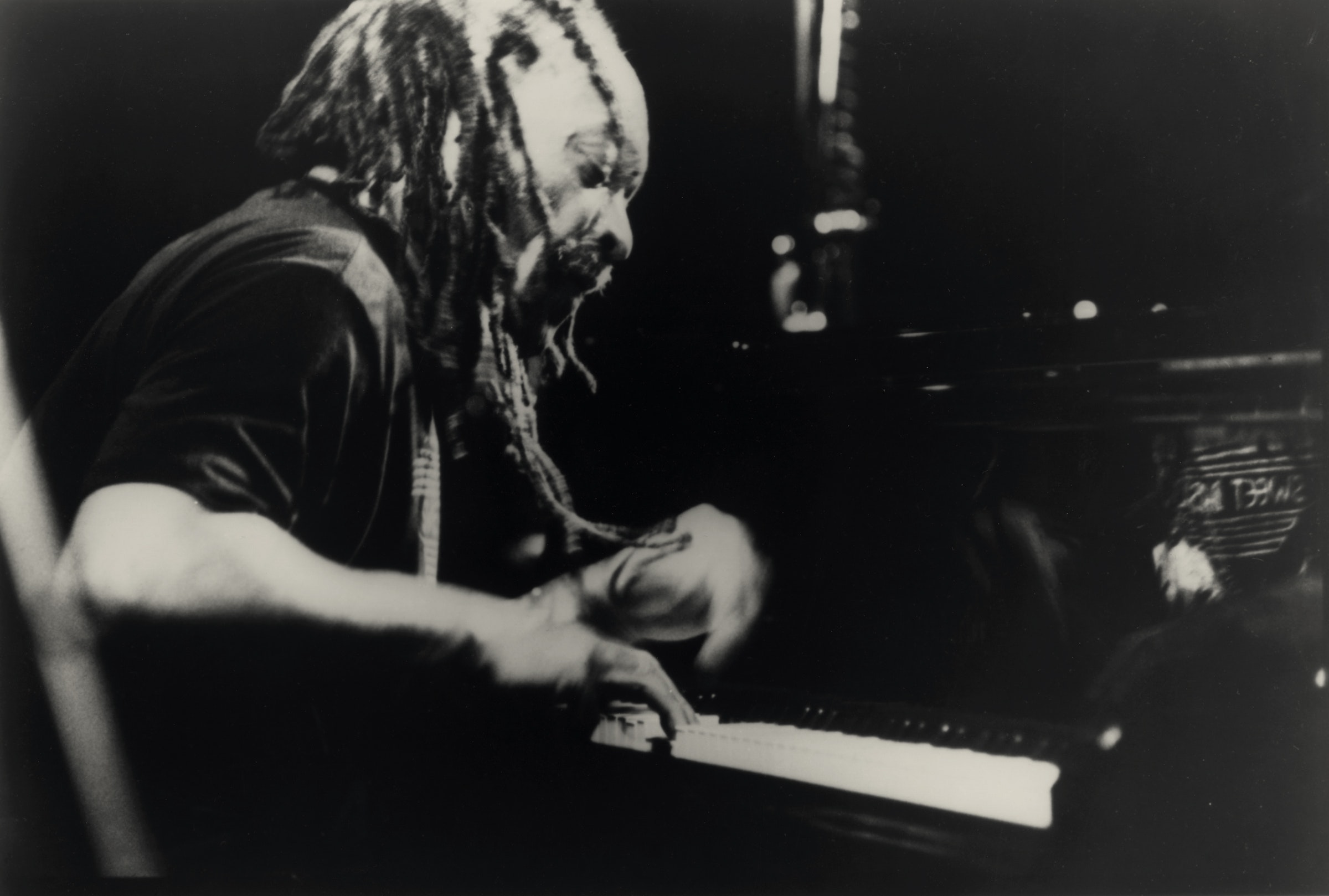 Everything I’ve lived, I am. I am not afraid of European influences. The point is to use them—as Ellington did—as part of my life as an American Negro. Some people say I’m atonal. It depends for one thing, on your definition of the term.… I have been atonal in live performances.… Basically it’s not important whether a certain chord happens to fit some student’s definition of atonality. A man like [Thelonious] Monk is concerned with growing and enriching his musical conception, and what he does comes as a living idea out of his life’s experience, not from a theory. It may or may not turn out to be atonal.A. B. Spellman, Four Jazz Lives (Ann Arbor: University of Michigan Press, 2004), 28.

Cecil Taylor (US, 1929–2018), the prolific poet and jazz musician, included this passage in the jacket liner notes for his 1958 album Looking Ahead!, released on Contemporary Records—one of the rare occurrences, during the time period, where a composer authored his own notes.Though various musicians did write liner notes for their recordings, beginning in the 1960s most of these texts were authored by paid critics. Notable examples of artist’s texts include Coleman’s liner notes for his 1961 LP This Is Our Music; and Taylor’s notes for his 1966 LP Unit Structures, which feature his essay “Sound Structure of Subculture Becoming Major Breath/Naked Fire Gesture,” theorizing the role of improvisational music-making and pointing to ways that its inherent performativity related to jazz traditions. See Andrew W. Bartlett, “Cecil Taylor, Identity Energy, and the Avant-Garde African American Body,” Perspectives of New Music 33, No. 1/2 (Winter–Summer, 1995): 274–293. Dubbed a kind of “Bartók in reverse” by poet A. B. Spellman, referencing the Hungarian composer known for integrating folk songs into his works, Taylor incorporated classical music (undoubtedly nurtured by his training at the New England Conservatory of Music) and modern Western composition to create a distinct kind of “blues.” Consciously pulling energies and techniques from European composers while blending traditional music from African American traditions, Taylor created a new potent energy force that he unleashed onto the keys of his piano. And its messages were disseminated through the air, sending lines of flight.

The music is not only a conversation but also a manifestation of bodily energy; its kinetic element is fundamental to free jazz performance, as noted by Amiri Baraka.In Blues People (1963), Amiri Baraka (aka LeRoi Jones) noted that avant-jazz experimentation is an extension of a “kinetic philosophy” that has always informed black music. He goes on to note that black music is always radical within an American context. See LeRoi Jones, Blues People: Negro Music in White America (New York: Harper Perennial, 1999). For Taylor, the improvisational performativity of his “energy playing,” gives way to a kind of communalization rooted in the interrogation of historical narratives, an exercise that is implicitly spiritual and leads to self-understanding. Taylor’s compositions create a space for critical discourse and social action, a concept further emphasized by his adaptation of the spatial term structures to describe his compositions and the martial term unit to characterize his ensemble. The “unit” comes to fruition in the “structures” they actively build. No matter whether with the unit or as a solo performer, Taylor transfers images into sound.

With its grounding in poetry, the term unit (for instance, a meter or foot, a rhythm) echoes Taylor’s performativity. He also understood the body as the locus of the improvisatory process. His utterances or motor responses became as much a part of compositions as his piano playing. In a review of the artist’s 1979 Walker-cosponsored concert at the Children’s Theatre in Minneapolis, a Star Tribune critic used the following words to describe Taylor’s playing: “He attacked the keyboard as strenuously as ever at some points—karate chopping a section of notes at both ends of the spectrum simultaneously, cross-armedly picking with near locked fingers around the middle C, his hand looking like a mouse king and his troops in The Nutcracker, and fiercely elbowing customarily warm bass notes.”

At a concert copresented by the Walker and Northrop Auditorium in 2000, Taylor would again unleash his iconoclastic sound and and fury onto the keys of his piano in a legendary improvisation with his trio (Dominic Duval on bass, Jackson Krall on drums) at the Ted Mann Concert Hall in Minneapolis.

Taylor was seen by critics as a master proponent of atonality, a term that refers to music lacking a tonal center or key (the absence of functional harmony), and is credited as one of the first significant musicians to introduce the theory to jazz audiences.According to Val Wilmer, by using notes outside the music’s key, artists gain a richer harmonic vocabulary. She goes on to state, “eventually the composer introduces so many notes into the key that a point is reached where the piece appears to be in no particular key.” See Val Wilmer, “Cecil Taylor: Eighty-Eight Tuned Drums,” in As Serious As Your Life: Black Music and the Free Jazz Revolution, 1957–1977 (London: Serpent’s Tail, 1992), 46. Underscoring atonality emphasizes the technical rather than the soulful element or the combination of the two. Longing for listeners to pay attention to the blues within, Taylor drew upon his training at the conservatory but combined it with jazz, which he called the music of the American Negro, to create a new music and strongly believed that his music should be taken in its totality.Often white music critics would discuss Taylor’s work in terms of its note manipulation and technical skill, which was something the artist resented because it emphasized the work’s parts instead of the whole. See A. B. Spellman, Four Lives in the Bebop Business (New York: Limelight Editions, 1994).

The Cecil Taylor experience tended to exhaust but from the beginning—before the artist’s rise to popularity and when he was performing in lofts in Lower Manhattan—his work was understood as an advanced music, one that pushed ideas culturally, and the fact of his genius was well known.Spellman, Four Lives in the Bebop Business.